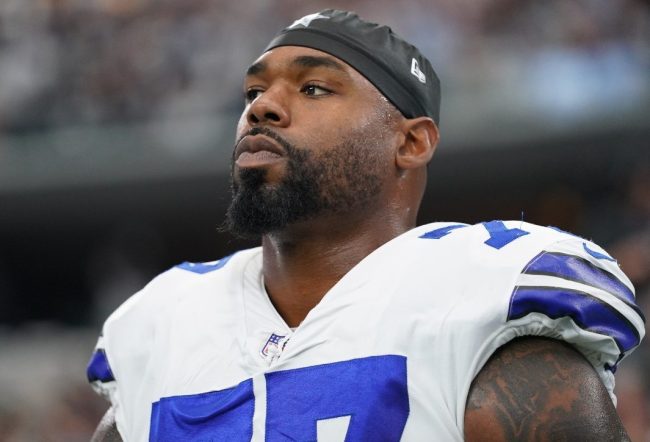 The Dallas Cowboys have high hopes to repeat for the NFC East crown. However, after a confusing offseason, the division is up in the air with the Philadelphia Eagles looking strong. Additionally, Dallas has come down with some notable injuries on the offensive end, which could hinder their playoff hopes. With another injury happening to the offensive line, Dak Prescott might have his work cut out for him.

The Cowboys’ star left tackle Tyron Smith could be out for the entire season due to a hamstring injury, per Rich Eisen. Dak Prescott is going to be missing his elite protection on his blindside, which could prevent him from performing at his best.

The #DallasCowboys received terrible news today that star left tackle Tyron Smith is out with a bad hamstring injury and may not return this season:#NFL #NFLPreseason pic.twitter.com/e1SBbZILLN

Additionally, the wide receiver core isn’t looking great either. Michael Gallup still hasn’t returned from his knee injury and James Washington is dealing with his own issue. CeeDee Lamb is essentially by himself out there with rookie wide receiver Jalen Tolbert. The Cowboys’ offense went from looking like one of the best to being rather questionable to start the 2022 season.

The front office did a solid job in generating a more well-balanced roster and that could be their saving grace. Dallas is shaping up to have one of the best defenses in the league, which is going to help Dak Prescott and the offense a ton. For that reason, the Cowboys should remain competitive, despite Tyron Smith falling to a serious injury.

We could see Michael Gallup and James Washington return sooner, rather than later. However, that all depends on how quickly they can recover.