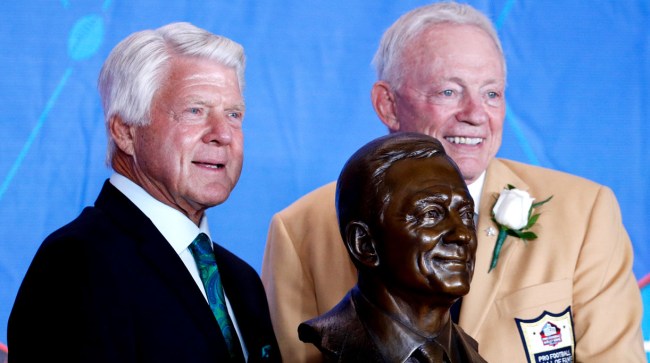 It has been more than 28 years since Jimmy Johnson was the head coach of the Dallas Cowboys.

In 2014, Cowboys owner Jerry Jones said that despite Johnson winning back-to-back Super Bowls the reason he isn’t in the team’s Ring of Honor is because of “disloyalty… I couldn’t handle the disloyalty.”

On August 5, 2021, during the 2021 Hall of Fame Game, a year after Johnson was inducted into the Pro Football Hall of Fame, Jones finally announced that he would put his former coach into the Cowboys’ Ring of Honor.

Former @dallascowboys QB @TroyAikman and current owner Jerry Jones join the set to talk with new Hall of Famer @JimmyJohnson and inform him that he will be joining the Cowboys Ring of Honor! ⭐️ pic.twitter.com/bINdwBiikw

12 months later, there has been no official announcement as to when exactly that will happen.

Will Jerry Jones ever put Jimmy Johnson into the Cowboys’ Ring of Honor?

This week, NBC 5’s Newy Scruggs sat down with Jerry Jones and asked him the question many Cowboys fans have had for over two decades: When is Jimmy Johnson actually going to get into the Cowboys’ Ring of Honor?

“Jerry, I like you. I respect you, but I’m going to say this, it seems very petty between what’s going on between you and Jimmy from the standpoint that he’s not in that Ring of Honor,” Scruggs boldly told Jones. “When you think about the Hall of Fame, when think about the championships… that’s how it comes off to people.”

“It’s BS for anybody to be making anything…” Jones interrupted. “I’ve said I’m going to put him in. Now, when I put him in, and the circumstances and what I do with that, there’s a lot more than Jimmy to think about here, and I’ve got a lot of other lives out here that have laid a lot on the line on the field that need to be in that Ring of Honor as well. And so how I do that, what I do it with, I get to make that decision, and it isn’t at the end of the day all tailored around whether Jimmy is sniveling or not.”

Jerry really just went and said Jimmy Johnson is sniveling, not that he’s being insensitive or anything.

“And I’ll be very sensitive and be very appreciative of what Jimmy is, but it’s too much to say, ‘Well, that is the thing that gets up and goes to bed at night when we think about the Ring of Honor’ as to Jerry and Jimmy’s relationship, okay?” Jones continued. “Jerry and Jimmy were two of the luckiest guys that’s ever been on this earth to get to be sitting here having this talked about if you want to know the truth about it.”

Jerry Jones says the Ring of Honor isn’t about whether Jimmy Johnson ‘is sniveling or not’
pic.twitter.com/y2nfwBL57y

So, basically, it’s probably not going to happen anytime soon. Not at all petty.