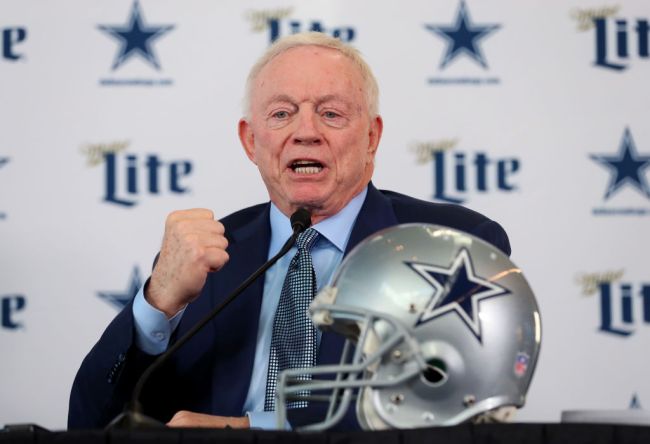 The Dallas Cowboys were duped this morning by star defender Randy Gregory.

In an unexpected turn of events, the team had reportedly agreed to terms with the pass rusher before Gregory spurned his former team for the Denver Broncos. The Cowboys were so confident that the deal had been done that the Dallas social media team posted news of the re-signing on Twitter.

Not so fast, my friend.

The agreement was apparently broken due to the Cowboys’ insistence on adding extra language to the contract after the fact. This could’ve had something to do with Gregory’s issues early on in his career. The defensive end wasn’t listening to what Dallas had to say past that moment.

With a deal not getting done, owner Jerry Jones is reportedly “livid.”

Jerry Jones was passionate about getting this deal done and was largely responsible for it coming together. The post-agreement change was not his idea/doing.

Apparently, the change in contract language was not Jones’s idea. So who’s to blame for the tweak that caused the Cowboys to lose out on Gregory?

Cowboys’ fans are turning to Jerry Jones’s sons as the fall guys.

Read the last paragraph the re-read [No C]’s tweet. Repeat until you feel it in your bones. https://t.co/jtNO7ECd2e pic.twitter.com/jnaN4srL5I

Stephen and Jerry Jr. have voiced their stance on taking fewer risks when they gain control of the team. And Gregory does bring risk with his drug issues in the past.

With Jerry reportedly being the main driver behind getting this deal done, it makes sense that his kids could be the culprits in its collapse.

There has been a clear disconnect between Jerry and The Son for awhile now.

When will Jerry put his foot down? https://t.co/MQ9flb396Y

Jerry Jones coming at Stephen after finding out that he fumbled the deal he had in place for Randy. pic.twitter.com/UG1Ofkhabc

Someone get Jerry Jones on @1053thefan ASAP. We want Stephen slander. And to think DLaw probably took a pay cut so we could resign Randy, and Stephen screwed that up. #DallasCowboys https://t.co/s2jpYSvGYK

Source: #Broncos ranked Randy Gregory as top edge in UFA over Chandler Jones. Believed they were close to deal last night, then #Cowboys owner “Jerry Jones recruited the hell out of him.” Cowboys reportedly attempted to change contract after agreement. Broncos became the choice.

Also reports are that Jerry Jones is pissed with what happened and the last minute changes to the contract wasn't of his idea or doing. So this all has Stephen Jones behind it.

#CowboysNation I fully believe that Stephen Jones is worse than we ever thought of Jerry Jones. pic.twitter.com/JEc8TRVtND

It stings for the Cowboys as they’d been able to talk Gregory into taking less money than originally anticipated. Unfortunately, they tried to do a little too much and it wound up biting them.