Jerry Jones Sounds Fed Up With Mike McCarthy In Latest Comments, Sparks New Speculation That McCarthy May Get Fired 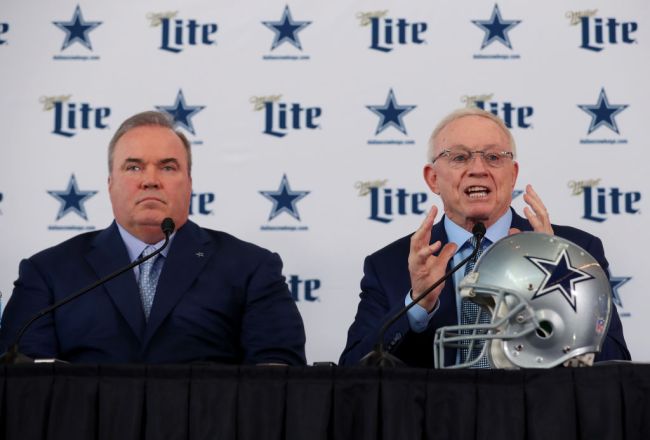 Jerry Jones sounds like he’s fed up with Mike McCarthy and his coaching staff.

Jones appeared on his weekly radio show days after the team’s playoff loss, and he didn’t appear to rule out firing his head coach.

While speaking 105.3 Fan, an angry Jones failed to give McCarthy an endorsement and said that he has a lot to think about this season offseason regarding his coaching staff.

Cowboys owner Jerry Jones was about as angry as he gets during one of his morning radio appearances today on @1053thefan: “I can’t get over what we did in the playoffs.”

Jerry Jones talking today about how much more this Cowboys team should have accomplished with the talent on the roster.

Jerry Jones says he has a lot to think about regarding the Cowboys coaches, including Mike McCarthy.@1053thefan

Cowboys owner Jerry Jones certainly did not give a ringing endorsement of Mike McCarthy and his coaching staff during his @1053thefan appearance this morning pic.twitter.com/lE1ZYYyOG4

"I won’t get in to any conversations that I’ve had with anybody relative to anything to do with staff," he tells @1053thefan. "I've got a lot to think about regarding these coaches."

Before the Cowboys playoff game on Sunday, there were reports that Jones was contemplating firing McCarthy in favor of Kellen Moore or Dan Quinn.

Some who know Jerry Jones well anticipate major changes if this team fails to meet expectations, especially wirh the prospect of losing both coordinators lingering next week https://t.co/sfyuFiH4n5

Dallas Cowboys owner Jerry Jones may consider a coaching change should the team fall short of expectations this season, league sources said, with both of his top assistants to head coach Mike McCarthy drawing serious head coaching interest from other teams. And the Cowboys did fall short, losing to the San Francisco 49ers in the wild-card round, 23-17. Several sources who know Jones well indicated that a loss in the wild card round would prompt Jones to at least consider the direction of the team as coordinators Dan Quinn and Kellen Moore prepare for numerous head coaching interviews.

We’ll have to wait and see what Jones decides to do in the coming weeks, but as of right now, it does sound like he’s done with Mike McCarthy.