Jerry Jones Opening Stadium To More Fans Despite Texas Passing 1.1M Cases Of COVID – Most In The US 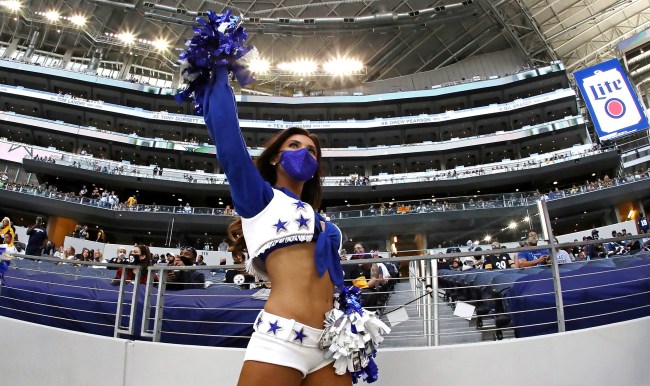 As we saw over the weekend, thousands of people lined up in their cars in Dallas, Texas to collect over 600,000 pounds of free food for their families, some waiting in line for almost 12 hours, due to the effects of the ongoing pandemic.

Texas, if it were a country, would currently rank 11th overall in the world with the most cases of coronavirus at around 1.1 million people.

Which is why it’s more than a little odd that Dallas Cowboys owner Jerry Jones said on Tuesday that he planned on allowing even more fans into AT&T Stadium to watch his last place 2-7 team play the Minnesota Vikings on Sunday.

During his weekly appearance on 105.3 The Fan, Jones somehow claimed that there has yet to be a positive test connected to attending a Cowboys home game, despite the team’s last home game hosting 31,700 of them – the most at any game this season in the NFL.

“My plan was to increase our fans as we went through the season, and we followed that plan,” Jones told The Fan. “We’ve had almost a third of the attendance in the NFL. I’m proud of that. Our stadium is particularly suited for airiness, openness, air circulation…

“I’m very proud of the fact that we do it safely, we do it smartly. Our fans are really helpful to say the very least. I see a continued aggressive approach to having fans out there. And that’s not being insensitive to the fact that we got our Covid and outbreak. Some people will say it is, but not when you’re doing it as safe as we are and not when we’re having the results we’re having. Literally, we have had no one report that they’ve had gotten any contact with COVID from coming to our football game.”

Meanwhile, the exact opposite is happening with the Philadelphia Eagles, Washington Football Team and Baltimore Ravens, who have all announced that they will be reverting back to having no fans in attendance after previously allowing them.

However, Jones did add that despite allowing more fans into AT&T Stadium he warns them, “don’t let your guard down.” He cares.

This pandemic is never going to end, is it?