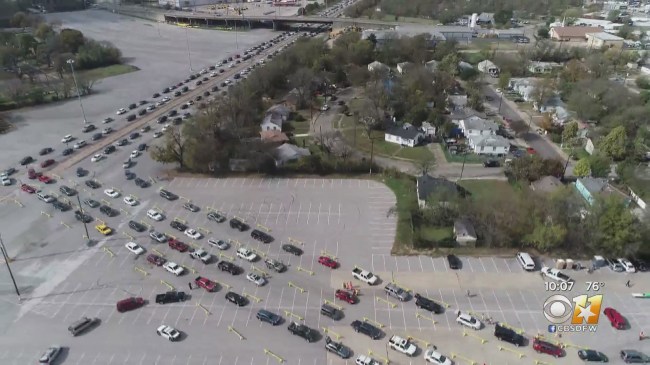 Here’s something you don’t expect to see in the United States of America in the year 2020. Thousands of people in their cars waiting in line – some for almost 12 hours – just to collect some free food thanks to the coronavirus pandemic.

On Saturday in Dallas, Texas, the North Texas Food Bank (NTFB) distributed more than 600,000 pounds of food to families, including 7,280 turkeys.

This is the sort of thing that can happen when a state like Texas last week became the first to report one million cases of coronavirus.

To put that into perspective, if Texas were a country, it would rank 11th overall in the world (just ahead of Mexico and just 275,000 behind the United Kingdom) with the most cases of coronavirus at just under 1.1 million. California is also now over one million cases as well.

Before the pandemic, the Dallas Morning News reports, holiday giveaways such as this would typically serve about 500 families. This year it was around 8,500.

NTFB president and CEO Trisha Cunningham said about the massive turnout, “We know that people need food or they wouldn’t be in line,” Cunningham said while looking at all the vehicles in the Fair Park parking lot.”

The event was scheduled to start at 9 a.m. but got underway early. By about 8:50, Armando Castillo of Seagoville drove away with his food after a wait of over 10 hours.

Castillo, 28, and his stepsons camped overnight in his car and were at the front of one of the lines — a far cry from one of the food bank’s summer distributions at Fair Park, when Castillo came and was greeted by long lines.

The Belize native said he got to Fair Park’s Gate 2 about 9 p.m. Friday and decided that they would wait it out.

“My phone is broken, so I told my wife, ‘If I don’t show up, don’t think the worst. It’s probably because I’m in line,’” Castillo said.

NTFB spokeswoman Anna Kurian told CBS DFW, “Forty percent of the folks coming through our partners doors are doing so for the first time.”

So far, since mid-March, the food bank has given out approximately 70.8 million pounds of food.