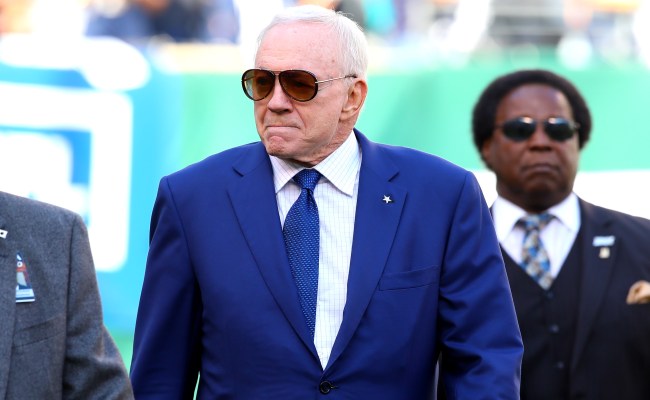 Every wonder how the .01% are riding out these times of uncertainty?

During the NFL Draft broadcast, Jerry Jones was looking like a Bond villain from his NFL Draft night war room.

Because the billionaire Dallas Cowboys owner/GM practically is a movie villain in the flesh, the Internet was quick to speculate where he was patching in from.

Glad we finally get a look at Jerry Jones in his Illuminati apocalypse bunker pic.twitter.com/8WJzyiPSYX

Seriously this looks like a super villain’s fallout bunker. Where is Jerry Jones drafting from? Lex Luther’s submarine? #NFLDraft pic.twitter.com/zSPUC2UP2a

Close enough! After some sleuthing, it was revealed that Jerry Jones is just chillin’ inside his $250 million super-yacht.

For all the money Jerry Jones has he’s sheltering in place inside a glorified Covid cruise ship death trap https://t.co/eqHqo1oGg2

Yes, I can confirm that Jerry Jones made the pick while on his yacht, which is nearly as big as the cruise ship behind it. Yes, I took this picture. pic.twitter.com/odkYek7195

Jerry Jones is a gangster. He does the pick from the bow of his yacht 😂 pic.twitter.com/zVwlEDNKPS

Congrats to Jerry Jones and his yacht copied from Taken's final level pic.twitter.com/6OMCStIba7

Absolutely ridiculous. Almost as ridiculous as Jerry Jones’ grandson wearing jeans + a blazer for a quarantine edition of the NFL Draft.