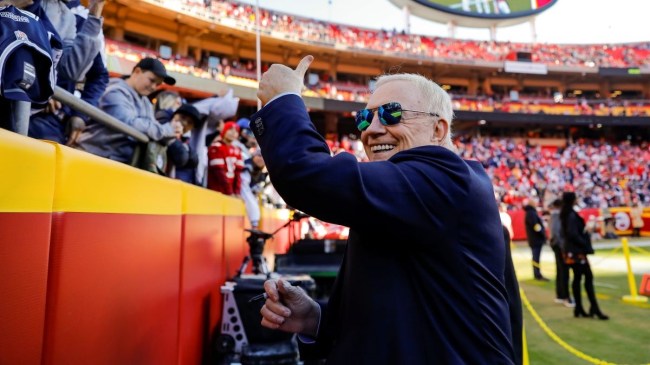 Odell Beckham Jr. is the most coveted wide receiver on the NFL free agent market right now. The three-time Pro Bowler had a career renaissance of sorts with the Los Angeles Rams in the second half of 2021. Beckham not only proved an effective option for Matthew Stafford, but he also rehabbed his often tattered image.

Unfortunately for the 29-year-old Beckham, his comeback journey was short. The superstar wideout tore his ACL in Los Angeles’ Super Bowl victory over the Cincinnati Bengals.

The Rams then reportedly low-balled Beckham in free agency. A report that Rams’ coach Sean McVay has since refuted. But mid-way through the 2022 season, Beckham remains on the sideline as he works his way back to full health.

A number of teams have been connected with Beckham, including the Rams, New York Giants and Green Bay Packers. But the one team that seems to be generating the most buzz of late is the Dallas Cowboys.

That buzz certainly won’t go away after the comments team owner Jerry Jones made on Tuesday morning.

Beckham hasn’t made any firm decisions to this point. But Jones went on Dallas radio station 105.3 The FAN on Tuesday for his weekly segment and may have just spoiled the surprise.

Cowboys owner Jerry Jones on @1053thefan on Odell Beckham Jr.: “Odell is someone that we have all the appreciation in the world for what he is as a competitor. I know the Cowboys star on that helmet when he puts it on could look pretty good.”

“Odell is someone that we have all the appreciation in the world for what he is as a competitor,” Jones said I know the Cowboys star on that helmet when he puts it on could look pretty good.”

Note that he did not say if Beckham joins the Cowboys or should he join the Cowboys, but rather when he joins. Now, it could well be a case of Jones misspeaking or teasing the media, as is common. But it could also be a sign of things to come.

Beckham recently revealed his family’s affinity for the storied franchise and Dallas is currently the odds on favorite to land his services.

Beckham may not return to the football field until December at the earliest. But Cowboys’ quarterback Dak Prescott likely wouldn’t mind the extra help.