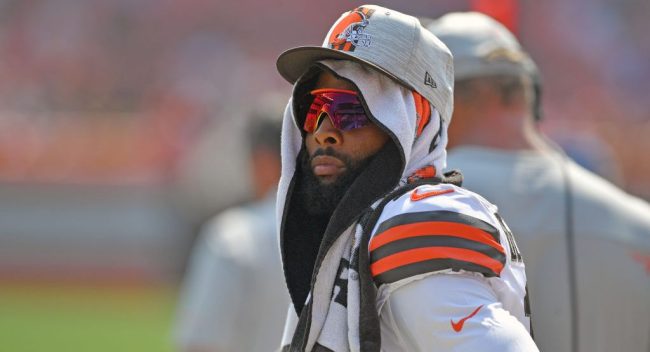 Odell Beckham Jr’s time as a Cleveland Brown is coming to an end after two-plus disappointing seasons as reports indicate the NFC North team will be releasing Beckham on Friday, which also happens to be his 29th birthday.

While Beckham’s Browns’ career got off to a solid start — OBJ racked up 74 catches for 1,035 years and four touchdowns during his first season in Cleveland — the last two seasons have seen Beckham’s production fall significantly below the levels that fans had come to expect from the former Pro Bowl wideout. During an injured-shortened 2020 season, Beckham caught 23 balls for 319 yards and three touchdowns, and this season, OBJ has just 17 catches for 232 yards and no touchdowns through eight games.

Once Beckham is released, he will be placed on waivers, giving other NFL teams the opportunity to sign him. According to league rules, the waiver order is updated weekly and is determined by team records. This week, the Lions own the top waiver claim, followed by the Miami Dolphins, Houston Texans, Jacksonville Jaguars, New York Jets, New York Giants, Washington Football Team, Philadelphia Eagles, Seattle Seahawks, and Chicago Bears.

With reports breaking on Friday morning that the Browns were on the verge of releasing Beckham, NFL fans, players, and journalists alike reacted to the news:

NFL cornerbacks on on Odell Beckham’s side kind of goes against all the Twitter fingers claiming he’s washed. pic.twitter.com/6FNS77LouO

@obj bye bye. Thanks for nothing, you won’t be missed #Browns

Thanks @obj for being unmemorable the last few years. You made 3 great catches as a member of the @Browns, all in non-playoff scenarios, all of which have already been forgotten. https://t.co/6ndPF5G6nI

Steve Smith looking in the camera and telling Baker Mayfield he isn’t very good and OBJ is moving on because of that. pic.twitter.com/OKIpiPEkfi

Posting nonsense for clicks and views… literally took me under his wing when I got here… https://t.co/GDPIGVhLsl

Odell gonna join the Rams, Bucs or Packers for the vet minimum and imma be sick

See no chance that the Bucs go after OBJ but his connection with Tom is interesting and is sure to lead to speculation. Money and depth are valid arguments against this move, but Odell being a “diva” or “washed” are laughable as arguments against

Posting nonsense for clicks and views… literally took me under his wing when I got here… https://t.co/GDPIGVhLsl

Odell Beckham Jr. played college football at Louisiana State University from 2011 to 2013 and was then drafted by the New York Giants in the first round of the 2014 NFL Draft. Beckham’s best statistical seasons came in 2015 and 2016, where he posted a combined 197 catches for 2,817 yards and 23 touchdowns over the course of 31 games.