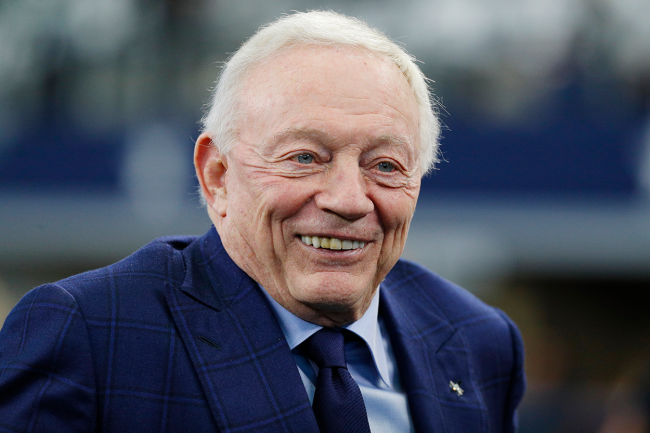 Earlier this month, a 25-year-old woman filed suit against Jones, claiming that he is her biological father. The very shocking lawsuit alleges that Jones paid the woman’s mother to keep quiet about her pregnancy, for which Jones is the father.

In turn, she wants the truth to come out. She claims that she is not motivated by money, but rather, she wants to not be prohibited from discussing her real father.

The woman, named Alexandra Davis, grew up in the North Texas area. She claims that her mother became pregnant with her in the mid-1990s.

A hearing for the case is set to take place on Thursday. From there, the case could draw out over the course of several months or years.

On Monday morning, at the NFL league meeting in Florida, Jones was asked about the suit. He did not choose to comment.

Jerry Jones on suit filed by Alexandra Davis, a 25-year-old woman who claims the Cowboys owner is her biological father.

A hearing is scheduled for later this week. pic.twitter.com/kKlEkoyeIG

Jones is no stranger to lawsuits. He has been involved in quite a few throughout the years for various reasons.

More than likely, his decision not to comment is a legal strategy. Jones might also just not want to talk about it. Either way, he is going to have to speak up on Thursday.