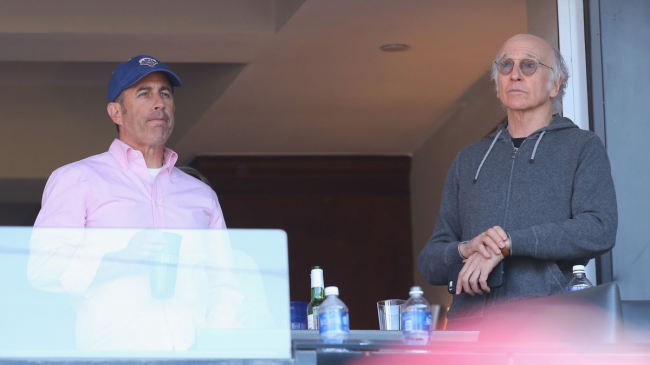 Jerry Seinfeld is a huge Mets fan. You may have seen his fandom if you’ve ever watched his hit sitcom, Seinfeld, or maybe you’ve spotted him at Citi Field this season with the club in the midst of its best campaign since the 1986 World Series team.

As of now, the Mets sit at 85-51 in a tie for first place in the NL East. Unfortunately, many fans believe this to be the regularly scheduled late season meltdown as the playoffs quickly approach.

The Mets are just 6-7 dating back to a Subway Series sweep at the hands of the Yankees, and they’ve now dropped three straight games to the woeful Nationals and Pirates.

Those struggles have allowed the Braves to gain ground as they now sit in a two-way tie in the pennant race. Atlanta has been red-hot over the last three months of the year. The Braves were 23-27 at the end of May, but they’ve gone 64-24 since. Tuesday marked the first time since early April that New York didn’t hold the top spot in the division.

Making things worse, NY ace Max Scherzer was recently sent to the injured list, and while he isn’t expected to be out long, it’s just awful timing. Seinfeld believes he has the reason for the Mets’ recent struggles.

Seinfeld blames Timmy Trumpet for the downfall, saying that the Mets celebrated their season too early. Here’s what he had to comment on a recent Instagram post.

“I blame that stupid trumpet performance. Celebrating in season. We haven’t won anything yet. Bad mojo.”

He continued on to compare the performance to a Baja Men show in 2000.

“Same as when the Baja Men showed up to play ‘Who Let The Dogs Out’ in the 2000 WS. Series ended right there.”

Here’s the Timmy Trumpet appearance Seinfeld is talking about.

While it’s definitely fun to watch, New York is just 2-3 since. Maybe he’s on to something. Seinfeld and the rest of the Mets’ fanbase are hoping the bad mojo ends before the postseason arrives.