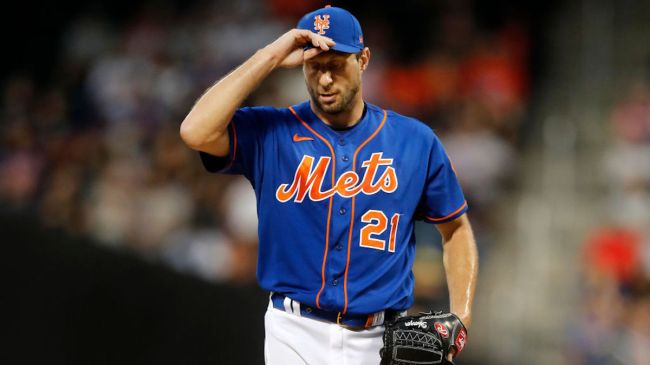 There are few certainties in life: death, taxes, and the New York Mets making their fan base feel like absolute garbage during the month of September.

Given that my father is from Flushing, Queens, I’ve unfortunately found myself as a lifelong fan of both the Mets and the New York Jets (an arguably WORSE franchise — imagine that for a second), and let me be completely honest with you: it’s an absolute slog. I’d argue that 75-80% of life as a Jets/Mets fan is misery.

That’s why you’ve seen so many videos of the Edwin Diaz walkout and the Citi Field fans having an absolute blast this year: because it happens about twice a decade in Queens. The Met’s momentum, though, has quelled in recent weeks, as the team has lost three-straight games to sub-.500 competition, and as a result, have relinquished sole possession of first place in the NL East for the first time in months.

Not only that, but because when it rains it pours, reports on Wednesday indicated that star pitcher Max Scherzer was being placed on the 15-day IL and would miss his next start. Combine all of the above with the prospect of the bats going cold and the Mets potentially having to play in a Wild Card game, and the result has regularly scheduled Mets fans’ September meltdowns.

Hug a Mets fan if you see one today. They don’t deserve all of this happening at once. https://t.co/sZ2C60Vmq3

My dad to me: “Well where I grew up, it made sense to root for the Mets and Jets.”

God watching my will to live be weakened every day https://t.co/Q3rWEfj2zV pic.twitter.com/oVxEhU12cZ

(They're going to Mets this thing right up, been knew) https://t.co/YaYkNVnRS9

I'm starting to get that feeling again… https://t.co/O6JpL5jhs4

From bad to worse https://t.co/001RTAVRSi

Did the Wilpons regain ownership? Where is this bad Juju coming from? https://t.co/azVROMPYND pic.twitter.com/AN00XSKbWK

The Mets have an opportunity to right the ship on Tuesday as they face the Pittsburgh Pirates in a double-header, giving them an opportunity to make up one of the games they’ve lost in just one day. Plus, for one of those games, they have future Hall of Famer Jacob deGrom on the hill.