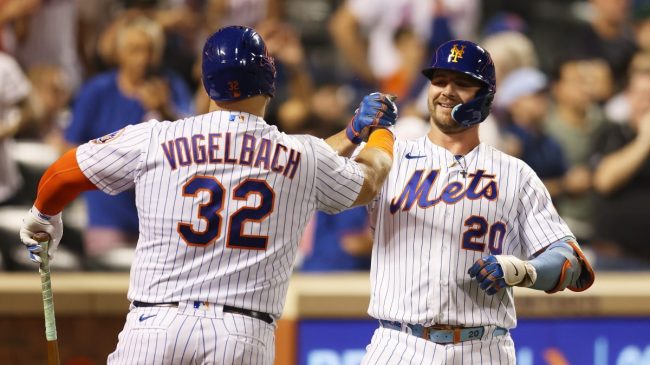 New York Mets outfield Pete Alonso is currently in the midst of one of the best seasons of his young career. The two-time MLB All-Star and two-time Home Run Derby champ is batting .273 with 31 home runs and already has 105 RBIs. The Mets, meanwhile, sit atop the National League East with an 82-47 records.

Much of that is due to a an offense that has scored 607 runs, fourth-most in the NL. Some of that credit goes to hitting coach and former American League Silver Slugger Award winner Eric Chavez. But Alonso also recently gave credit to a former coach that not many know about.

On Sunday night, Alonso put on a comedy show to benefit his charity, The Alonso Foundation. The event was co-hosted by New York WFAN radio personalities Craig Carton and Evan Roberts. Before the event began, however, Alonso took the mic and welcomed everyone to the show.

While doing this, he shared an absolutely incredible story about some hitting advice he picked up from an old summer league manager while in college at the University of Florida.

Just listen to Pete Alonso’s story he told last night at his Comedy Show about hitting in the Northwoods League when he was 19. #LGM pic.twitter.com/JU8GfycDxE

The story began with Alonso playing for the Madison Mallards in the Northwoods League in 2014.

“I get to Madison, Wisconsin and the team I’m on is not hitting. We have lost probably about seven or eight games in a row. And my god, we fu*king stunk. So our manager was extremely, extremely pissed off about the lack of offensive production. And rightly so, because we were fu*king horrible. Anyways, it’s dead silent after this loss in the clubhouse. Dead silent. You could hear a pin drop. All of us are like ‘man, our manager’s about to blow up…’

“…So our manager, I think he was older than (Mets manager) Buck (Showalter). He’s older than Buck. He’s in his whitey tighties that were sagging down to here (*points to knees*), with two Miller Lite tall boys. He comes in the clubhouse like this (*kicks stool*), ‘god dammit! That was the worst offensive production I’ve ever seen. We didn’t execute. This was absolutely horrible. I can’t believe this. You sucked, you sucked, you sucked and you are fu*cking horrible…’

Alonso continued to say that the manager asked if any of the players were virgins. To which nobody raised their hands. He then explained that if they didn’t think while they were having sex, they shouldn’t think while at the plate. Alonso said the team went out the next day and won in a blowout.