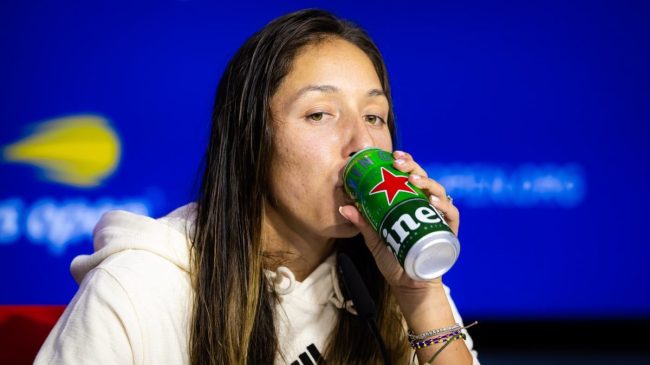 Look, we’ve all been there. Sometimes after a hard day at work there’s nothing more that you want to do than crack open a nice alcoholic beverage and drown your sorrows.

Though most of us are not world class tennis players, and most of us don’t have to give a press conference shortly after that rough day in the office.

But for US tennis star Jessica Pegula, that’s just another day in the life.

Jessica Pegula has rocketed her way onto the US women’s tennis scene in recent years. The 28-year-old daughter of Buffalo Bills owner Terry Pegula has reached the quarterfinals of the Australian Open (twice), French Open and US Open all in the last two years.

But Pegula has yet to advance past that point in singles’ competition.

That trend continued on Wednesday night when she dropped a 6-3, 7-6 (7-4) loss to top-seeded Iga Swiatek of Poland. Swiatek is a 21-year-old budding superstar with two Grand Slam titles to her name already.

But Pegula didn’t wallow. Instead, she did what any red-blooded American does after a tough day at work. She cracked open a beer.

.@darcymaine_espn "I like the Heineken"
J Pegula: "Thanks, I'm trying to pee for doping, so… Although it does help ease the loss " pic.twitter.com/jeQ905sRvK

Pegula arrived at the press room at Arthur Ashe Stadium with a Heineken in hand, though not for the reasons you’d expect. While she said the beer did help curb the pain of the loss, she was actual trying to hydrate for doping test.

Players are regularly asked to drug test following matches, but rarely do they turn to a beer in order to move the process along. We’ll just call this one multitasking.

Hopefully Pegula was able to break the seal and get the doping test over with quickly. That way she can really kick back, maybe grab a six pack.

That’s our kind of tennis player.