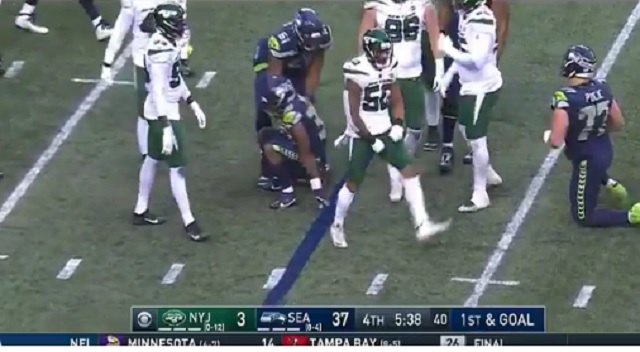 Some Jets defenders were feeling themselves on Sunday despite getting blown out by the Seahawks.

Late in the fourth quarter, Jets DB Bless Austin committed a boneheaded unsportsmanlike conduct penalty on third down because he decided to take off his helmet and talk trash to the Seahawks sideline.

So Bless Austin took off his helmet and then stuck his tongue out at the #Seahawks sideline because the #Jets made a third-down stop down 37-3.

God damnit the #Jets are amazing

A few plays later, Austin’s teammate Frankie Luvu celebrated and flexed after making a tackle while down 34 points.

Jets Frankie Luvu celebrating and flexing while down 37-3 and Seahawks are about to score again lol pic.twitter.com/1LMIiU5eOB

Fans immediately blasted both Jets players for celebration while gettingg crushed by over 30 points.

Luvu flexing and taunting Carlos Hyde after a 1st & goal hit in the fourth quarter down 34 points is exactly everything the New York Jets stand for.

Nothing more "Jet-like" than @frankluvu7 flexing after making a stop while being down 34 points in the 4th quarter to Seattle.#Jets

Jets defense down by 34 celebrating there first 3rd down stop of the day.

The Jets player celebrating after getting a TFL while losing 37-3 like pic.twitter.com/M4ChoqKgB9

You’re down 34 celebrating a tackle? Disband the entire Jets franchise