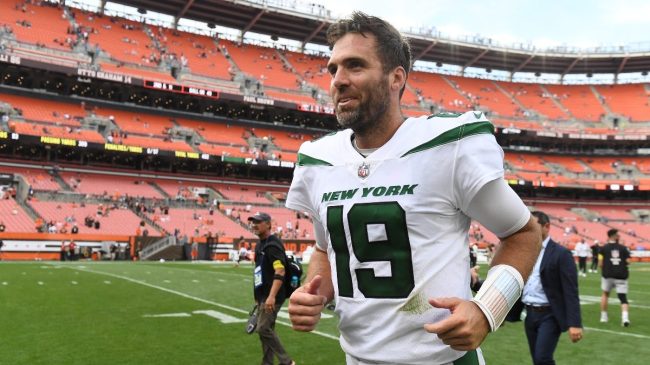 The New York Jets put on a strong performance in the final minutes of the game to earn a win over the Cleveland Browns. Everything went right, as the team surmounted a 13-point deficit with just over a minute remaining in the contest. Afterward in the locker room, the entire roster went bonkers for Joe Flacco, as the veteran quarterback surprisingly led his team to victory.

New York waited for Flacco to enter the locker room. As soon as he walked in, the veteran quarterback let it all out as he embraced the Jets head coach Robert Saleh. After that, the entire team celebrated the big win with Joe Flacco in the middle of the chaos.

It’s not all about the $: pic.twitter.com/AzfvUzwJLI

This is a huge victory for the Jets. New York has struggled over the years, as they haven’t been relevant since 2010. This franchise and the fanbase could use as much hope as possible. So it’s awesome to see the team celebrate with Joe Flacco after their bonkers comeback victory.

They still have some kinks to iron out, but for the most part, Jets fans should feel ecstatic right now. Especially considering Zach Wilson is supposed to come back soon from injury. If this squad can build momentum for his return, then New York could be in a decent spot early in the season.

Either way, let’s just appreciate Joe Flacco for the time being. He’s like 100 years old and still slinging it with the best of them. He deserves all the praise from the Jets for this Week 2 win.