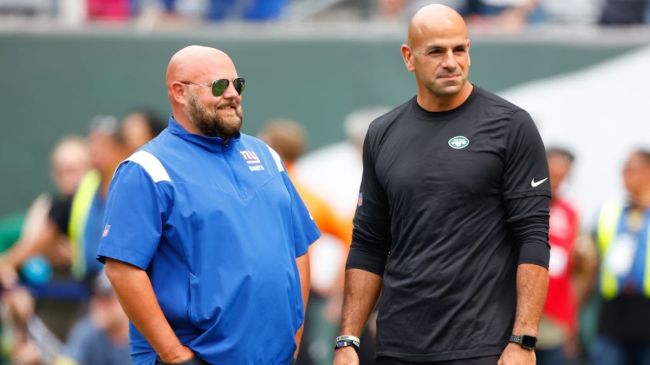 After seeing what Brian Daboll and the New York Giants pulled off in Tennessee against the formidable Titans on Sunday afternoon, I’ve now officially come to the conclusion that New York Jets head coach Robert Saleh is, unfortunately, not the answer for the seemingly cursed franchise.

Not only did the Giants look like a more competent and competitive football team after just one game under Daboll than the Jets have looked under Saleh for the last two years, but they actually *won* the game. Not “fought hard”, not “played well”, not “dug deep” but actually WON. And that is a stark contrast to what the Jets have been up to for the last couple of seasons, with Saleh constantly and routinely harping on moral victories.

Needless to say, I’m not the only New York Jets fan beginning to feel this way as tons of long-tortured Gang Green supporters took to Twitter to make the comparison between Daboll and Saleh, and how it doesn’t necessarily paint the Jets head coach in the best light.

I just want Robert Saleh to take the podium and say "We were embarrassed. Out prepared, out played. We made inexcusable mistakes and week 2 will be much better" That's all. #Jets

I love Robert Saleh but his press conference answers are getting old really quick. There is no excuse for today’s performance. #Jets

Saleh likes to run up and down the stands pre game…
Teams like to run up the score against the #Jets
Poorly coached team.

Need this from Saleh, set a standard…give a damn https://t.co/MyvDEhTiHC

Robert Saleh honestly might be a problem. Look at daboll vs Saleh. Daboll first game with a worse roster and he's got them competing and winning. Meanwhile Saleh is over here "proud of our guys for fighting" bruh you didn't score a TD until garbage time….what fight????

Daboll is light years better than Saleh. Saleh is all about moral victories & that ain’t gonna cut it.

Daboll is what Jet Fans want Saleh to be😔 https://t.co/9jb1OGJcXt

The Joe Flacco-led Jets will look to get their first win of the season next week when they take on the equally mismanaged Cleveland Browns. As for the 1-0 Giants, they’ll be hosting Baker Mayfield and the Carolina Panthers for their season opener at MetLife Stadium on Sunday, September 18.