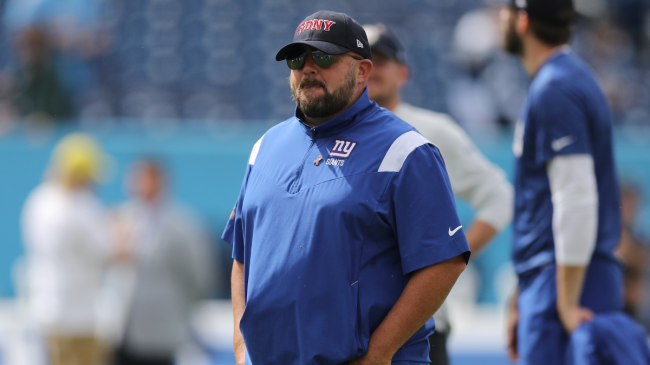 Brian Daboll is a happy man on Sunday evening. He helped lead the Giants to an upset victory over the Tennessee Titans, getting his team out to a 1-0 start on the season.

The game saw Saquon Barkley outperform Derrick Henry, rushing for 164 yards and a score. Daniel Jones did just enough under center, and the Giants’ defense kept them in the game after falling behind 13-0.

The win was one of many upsets on the day, with the Steelers, Bears, and Vikings pulling off major victories, too. There was also an unexpected tie in the Texans-Colts game, while the Saints escaped with a last second victory after being down by 16 in the fourth quarter.

And with those upsets came celebrations.

The Giants were no different, and the NFL world went crazy upon seeing Brian Daboll dancing in the locker room.

After New York’s surprising win, head coach Brian Daboll was spotted getting down in the locker room celebration. Fans posted their hilarious reactions to seeing the team’s leader dancing.

Daboll earned the win by making some pretty gutsy play calls late in a close game, some of which worked out for the coach and some of which could’ve been costly.

But he stuck with his guns in being aggressive with his strategy, and he couldn’t have been more excited to land the W. Take a look at the initial social media reaction.

This FanDuel account said, “Brian Daboll getting lit in the Giants locker room.”

BRIAN DABOLL GETTING LIT IN THE GIANTS LOCKER ROOM 🤣pic.twitter.com/yCLXGFwVCq

One Giants fan site wrote, “Brian Daboll is for the culture.”

Brian Daboll is for the culture pic.twitter.com/4J5bWIi2LC

This sports betting site also made a comment on the dance moves. Daboll is clearly excited to get the 2022 season off on the right foot.

Brian Daboll broke out the moves in the locker room after the Giants' W 🤣pic.twitter.com/aRojWugJ0E

We’ll see if he can keep the momentum going in Week 2.