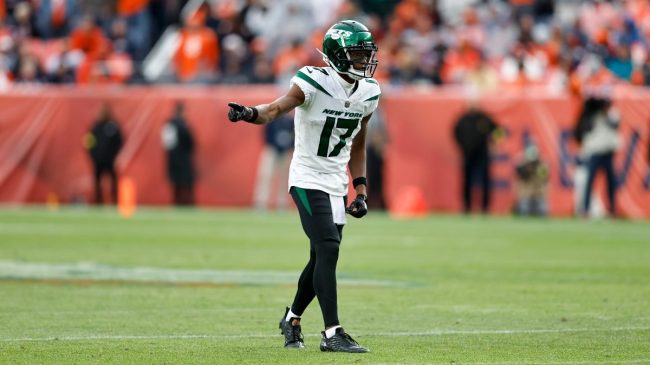 Nothing went right for the New York Jets offense as they ended up losing 10-3 to the New England Patriots. The fans are furious with Zach Wilson right now after he had another abysmal day. Especially after he took no accountability in the postgame interview. Meanwhile, rookie wide receiver Garrett Wilson blasts the team for their efforts.

According to Mike Giardi, Wilson was incredibly frustrated with the loss to the Patriots. The Jets wide receiver didn’t drop any names, but he called out his team and coaching staff during the postgame interview. If anything, this is a perfect example of leadership the team surely needs.

Additionally, Wilson specifies the Jets must improve in one key area. “The passing game.” He doesn’t drop Zach Wilson’s name, but considering how bad the young quarterback looked, he’s definitely part of the problem. It’s hard to argue with him, as the Jets’ passing game could really use some improvement.

He continued, “I’m gonna call it like it is. We gotta get better in the passing game if we wanna be at where we wanna be at. We know we can be there. That’s the most frustrating part. We ain’t gotta be in the games like this. They didn’t even score on offense & we lost the game.”

Then, Garrett Wilson makes his stand and claims the Jets must, “put more trust in the wide receiver room,” per Mike Giardi. That might be wise, considering he, Corey Davis, and Elijah Moore are all talented pass options not being utilized enough.

Keep an eye on this situation. Although Wilson never name-dropped his quarterback, it’s hard not to think about Zach Wilson. With New York in the playoff hunt, the coaching staff may be hesitant to make a quarterback change. Even so, the Jets have some problems they need to solve quickly.