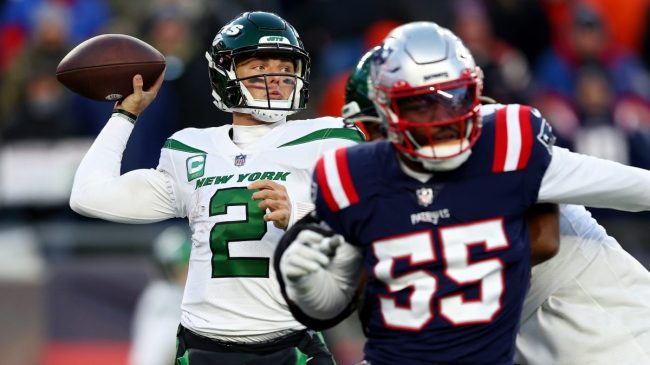 It was an awful day for the New York Jets. After building up some momentum in previous weeks, the team fell apart against the New England Patriots again. The offense looked atrocious and many are pointing the finger at Zach Wilson. Now, the second-year quarterback has the fans fuming after his postgame interview.

Jets Videos shares a clip of Wilson talking with the media. Connor J. Hughes asked the Jets quarterback point blank, “do you feel like you let the defense down at all.” Without hesitation, Zach Wilson said, “no.”

.@Connor_J_Hughes: “Do you feel like you let the defense down at all?”

It’s pretty hard to agree with Wilson here. Especially considering the guy didn’t even surpass 80 yards passing on the day. Additionally, he only completed nine passes off of 22 attempts. So, it’s pretty wild how quickly Zach Wilson shut down that question.

Jets fans aren’t happy whatsoever. They see a lack of leadership in their young quarterback. It’s even worse after you hear Justin Hardee’s answer to a similar question.

So, as you can imagine, Jets fans are incredibly displeased with their quarterback.

It’s not just that Zack Wilson is atrocious. It’s that he doesn’t take accountability

His maturity has been in question since his days at BYU.

he needs to grow, the whole team must be so mad rn.

At this rate, everyone is going to want Zach Wilson out of New York.

This did it for me

We’ll see how the rest of the season plays out. The Jets are still in playoff contention, but clearly, Zach Wilson needs to make some changes.