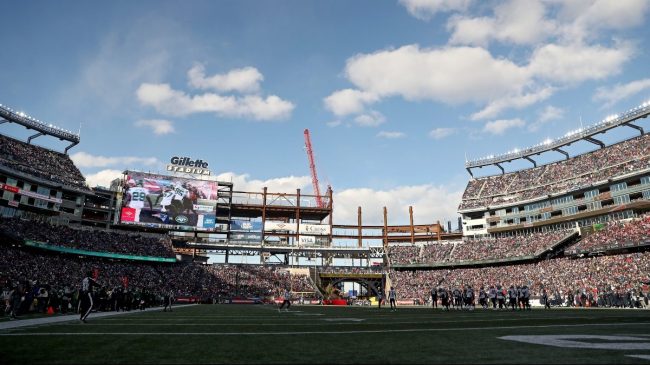 The New England Patriots and New York Jets might have played the most boring game ever. It was tied 3-3 with just 26 seconds on the clock and New York was punting it once again (17 punts between both teams today. Sheesh!). That’s when cornerback Marcus Jones put the team on his back and won the game.

Foxborough erupted after Jones took it to the house. With only five seconds remaining in the game, the Patriots avoided going to overtime, and thank goodness. The fans didn’t deserve to keep watching those two teams beyond the necessary four quarters. Regardless, here’s the electrifying punt return for your enjoyment.

Now, some are calling foul due to the block near the goal line on that play. Here’s a closer look at it.

Was it a block in the back? It sure looked like it. However, we’re just happy for that game to finally be over. Maybe if Zach Wilson and the Jets could move the ball down the field, New York wouldn’t have lost on a Patriots pun return. Either way, fans are losing it over the touchdown.

THIS GAME WAS SO BORING UNTIL NOW

“I just had this crazy feeling when I saw Marcus Jones back there to return the punt.” pic.twitter.com/uoCPiXZlED

Patriots fans are going crazy out there.

Everyone is going to be arguing about the possible block in the back call, but New England goes 6-4 on the season after this win over the Jets.