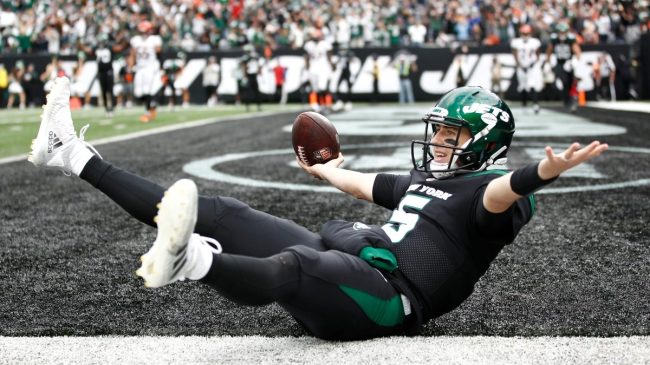 The New York Jets enter halftime with a 17-10 lead over the Chicago Bears. Mike White is subbing in as quarterback, as Zach Wilson was benched for his atrocious play this season. However, it sounds like the fanbase is ready to name White the full-time starter for the rest of the year after his monster first-half performance.

According to PFF, the Jets’ backup quarterback has put up 235 passing yards and two touchdowns off of 16/20 throwing. That gives him a nearly perfect passer rating of 149.0, which is something we haven’t seen Zach Wilson do much of.

Mike White at half:

As if Jets fans weren’t already fed up with Wilson, this first-half performance out of Mike White confirms they’re ready to move on. It’s not a good look for Zach Wilson whatsoever, as he hasn’t shown much improvement since his rookie campaign. For that reason, New York fans are all about White right now.

Although the Jets claim they’re not giving up on Zach Wilson, the fanbase surely is.

Zach Wilson your time in NY is done

When you put it this way, it might be time for New York to move on.

… in the first half. #NFL #fantasy #Jets #TakeFlight

We’ll see if the coaching staff decides to keep Mike White as the long-term answer. However, he’s making a strong case to be the Jets’ starting quarterback for the remainder of the season. Look for New York to keep riding the hot hand, especially considering they’re in the middle of the playoff hunt.

For that reason, Zach Wilson’s time could very well be done in New York.