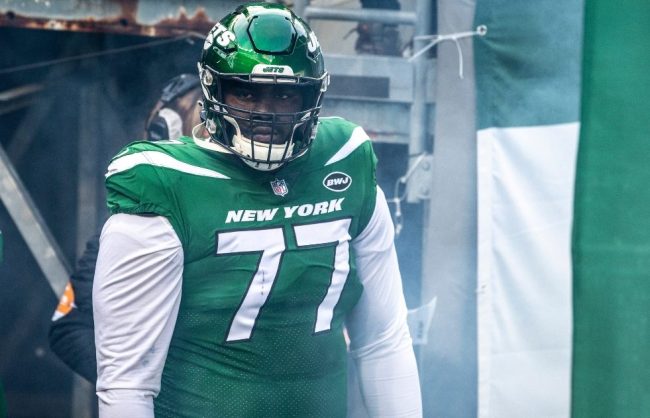 The New York Jets were dealt a brutal blow after Mekhi Becton fell to another season-ending injury. It’s been a rough start to his career, as the former first-round pick has been unable to stay healthy. On Tuesday, the young left tackle couldn’t help but feel moved by Robert Saleh after the Jets head coach delivered an emotional message.

During a press conference, Saleh left a sincere and thoughtful message to Mekhi Becton. It has to have been an extremely frustrating time for the Jets left tackle as he has been under scrutiny throughout his early career. Many have dogpiled him by calling Becton a bust, or injury prone. However, Robert Saleh made sure to let his left tackle that he has his back.

"We love Mekhi. We appreciate everything he's done. His ride is not over. His story is not over." – Coach Saleh pic.twitter.com/Jisqk0uuK9

Shortly after, Mekhi Becton quote tweeted the video with a reaction of his own. It’s nice to see him remain positive during this time. Especially considering this is the second year in a row he has suffered a serious injury. Hopefully, he can return to the Jets next year without any hiccups. For now, Becton will be focusing on rehabbing his knee.

I appreciate you more than you know coach!! Love you coach!!! ITS NOT OVER!!! https://t.co/TjF8k6jzAc

Hopefully, this doesn’t become the norm for Mekhi Becton after this injury. Not only is his career on the line but the Jets could use his abilities within the trenches. Becton was an absolute monster in college and has the potential of becoming one of the best offensive linemen in the league.

Look for New York to monitor him closely while he rehabs his knee. The silver lining here is that Mekhi Becton suffered this injury early in training camp. That means he’ll have plenty of time to recover and prepare for the 2023 season.