Jets Rookie Frankie Luvu, Who Has Only Made $4k In The NFL, Is Now In Debt With The League After Getting Fined $20K 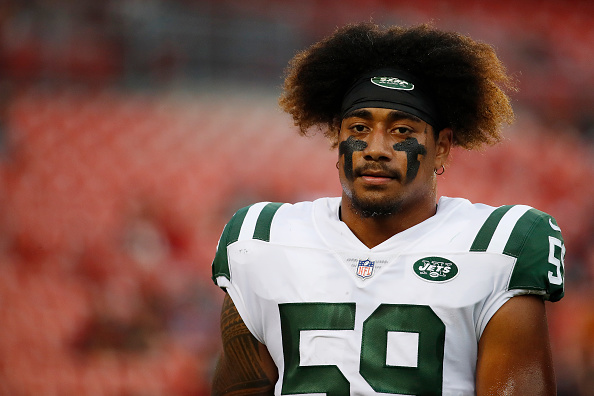 After delivering a brutal hit on Redskins QB Jets rookie Frankie Luvu was disciplined by the league this week.

Jets run a TE stunt. Luvu gets through the far b-gap. But no excuse for this penalty, its just dumb. The QB clearly releases the ball AND he lowers his head to make the hit. Roberts also plays this poorly as he needs more depth in his drop as its 3rd and 10 here. pic.twitter.com/ADULPnd3pN

The un-drafted rookie linebacker was fined $20,054 for the hit which is a bit of a problem because Luvu has only made approximately $4k this season so far.

Thankfully for Luvu he will only be forced to pay the debt if he makes the team.

If he makes the roster it will be deducted….if he’s released if’s voided… but still if he makes roster his first paycheck will be about $17k after taxes…so technically he will be playing for free Week 1 If makes team

According to the NY Post Luvu is “turning heads” within the organization with his play this preseason but he’s not a lock to make the team as of yet.

I’m trying to help the team in any way I can,” he said. “It’s a big opportunity, but we got [linebackers] Jordan [Jenkins] and Josh [Martin]. They’ve been helping me out a lot, being a mentor.”

There has been a wide-open competition this summer at outside linebacker, and Luvu could prove worthy of being rotated in if he can consistently get to the quarterback. After Jenkins, nobody has emerged as the favorite at the other spot.

He’s right there with the rest of them,” coach Todd Bowles said. “These next two weeks will be important for him.”

Luvu remains confident that he will make it to the NFL.

e had good examples to follow. His cousin, Destiny Vaeao, is a defensive tackle for the Eagles, and Luvu trained prior to camp with Hawaiian linebacker Kamalei Correa of the Ravens. Vaeao, two years his elder, also attended Washington State and went undrafted before finding a home with the Eagles, providing Luvu with a blueprint.

Hopefully Luvu makes it on the team, pays his debt and eventually turns a profit.