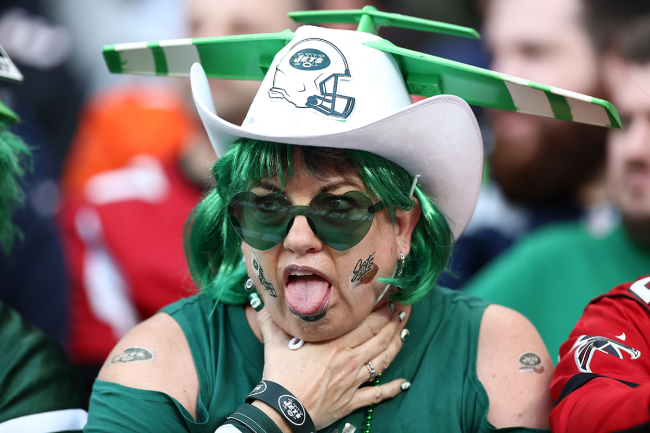 The Jets are bad again. After shockingly beating Cincinnati behind Mike White’s literal Hall of Fame performance, New York lost to Indianapolis by 15 and Buffalo by more than that.

During Sunday’s loss to the Bills, Josh Allen completed 21-of-28 passes for 366 yards, two touchdowns and an interception. While it wasn’t his best game of all-time, he still completed 75% of his passes for 366 yards and two scores en route to a 28-point win. Certainly not a bad day at the office.

Prior to the game, somehow, Jets fans had hope. Credit to them. No matter how terrible their team is, they show up and show out.

On Sunday, during a tailgate in the parking lot, a group of fans decided to try to perform voodoo on Allen. Obviously, it failed.

In a video, it shows the Jets fans set up a No. 17 jersey on a pole, doused it with lighter fluid, and set it ablaze. Meanwhile, the Gang Green faithful proceed to unleash a “J-E-T-S” chant that was very average, at best.

Obviously, the ceremonial burning of the jersey did not go well for the Jets fans. Their team lost badly and the man whose jersey they burned burnt their team.

Shoutout to the guy in the LaDainian Tomlinson jersey though. That guy is a true Jets fan through and through.