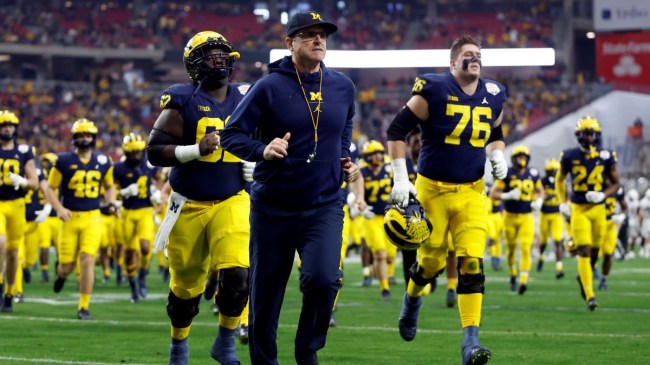 By any measure, Jim Harbaugh has had as good a two years as any college football coach in the country not named Kirby Smart.

(Though TCU coach Sonny Dykes could change that fact on Monday)

Harbaugh has led Michigan to a pair of Big Ten titles, a pair of College Football Playoff appearances (the first and second in program history) and a combined 25-3 record in those seasons. It’s hard to do much better than that.

But in the end, Harbaugh hasn’t gotten it done when the chips are down in the playoffs. This has led some to wonder if a return to the NFL may be on the horizon.

A report from The Athletic stating that he would likely leave if given the opportunity did nothing to quiet the concerns of Michigan fans.

Harbaugh tried to assuage those fears with a comment on Wednesday but wasn’t exactly fervent in shooting down the rumors. He then released a full-on statement on Thursday.

But the contents of the statement only made things worse.

“As I stated in December, while no one knows what the future holds, I expect that I will be enthusiastically coaching Michigan in 2023,” the statement read in part.

Now, I’m no expert, but “no one knows what the future holds” doesn’t exactly sound super commital. Who knows, maybe Harbaugh is just trying to get a bigger payday from Michigan AD Warde Manuel?

Either way, the statement only served to raise fears, not allay them.

In other words, "We'll see what kind of offers I get from NFL teams, then we'll see what happens" https://t.co/JWro5fYFSa

Hats off to Harbaugh for crafting one of the best ways to say he’s exploring all options while loving Michigan https://t.co/eYW1ZoeNJH

“While no one knows what the future holds….”

Not what you want to hear 😂😂 https://t.co/jVzxg7LymY

The Media, M Fans and Recruits: JIM, ARE YOU STAYING???

Will Jim Harbaugh be in Ann Arbor next season? Whomst can say?!