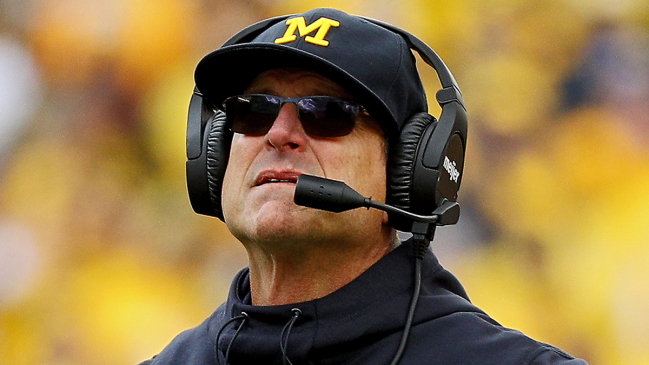 On New Year’s Eve, the University of Michigan’s football season came to a fairly shocking end after the Wolverines fell to TCU by a score of 51-45 in the semifinals of the College Football Playoff. It was a fairly hard loss to stomach, as it looked like the boys in the maize and blue (who headed into the contest undefeated) had a very real chance to punch their ticket to the championship game after wrapping up the most impressive regular season of the Jim Harbaugh Era.

Based on the progress the head coach has made since taking the reins in Ann Arbor in 2015, it seems like there’s a very good chance he’d like to continue what he started next season. With that said, most college football fans know Michigan’s offseason hasn’t truly begun until rumors about Harbaugh potentially defecting to the NFL start to swirl.

Harbaugh was seemingly on the verge of making the leap following the end of last year’s campaign after being courted by the Vikings, but he claimed he was fully committed to sticking with the program in the long run after flirting with what he said was a “one-time thing.”

However, plenty of people are skeptical that was actually the case, and it didn’t take long for the rumor mill to ramp up production after Michigan lost to the Horned Frogs. Earlier this week, one NFL insider asserted Harbaugh wouldn’t think twice about peacing out if he received any offer to helm an NFL team, and there’s speculation the Panthers have emerged as potential frontrunners as they gear up to find a permanent replacement after firing Matt Rhule midway through the season.

Now, we have some insight into how things may unfold courtesy of the man himself. On Tuesday, Harbaugh chatted with Queen City News, and while he didn’t deny he may be interested in the Carolina job, he seems to think he’ll be returning for his ninth season with the Wolverines when everything is said and done.

In a conversation with Jim Harbaugh, the Michigan Head Coach tells @Queen_City_News “although no one knows the future I think I will be coaching Michigan next year.“

Harbaugh’s previous NFL stint saw him rack up a very respectable 44-19 record with the 49ers over the course of a four-year tenure where San Francisco competed in Super Bowl XLVII while appearing in the NFC Championship game on two other occasions.

Based on what he’s done in Michigan since then, it’s easy to see why he’s an attractive candidate for an NFL franchise in need of a new skipper, but we’ll just have to wait and see how the chips ultimately fall.