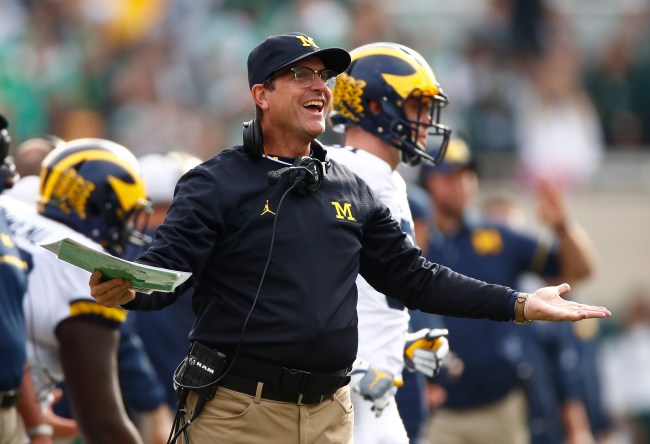 To stay on-brand with the year that is 2020, the unthinkable happened during Michigan’s season opener against Minnesota on Saturday, Jim Harbaugh wore pants that were not khakis. Harbaugh is a man that always wears khaki pants on the sideline, heck, I even saw the man at the PGA Championship at Bethpage a couple of years ago when it was extremely hot and he was in khaki pants.

Khaki pants – and maybe eating a booger here or there – is what Harbaugh is known for.

He decided to change things up against the Golden Gophers on Saturday though and wore a pair of navy pants. The new-look didn’t bring the Wolverines any poor luck or anything as they won the season opener 49-24 on the road.

Harbaugh, who seems like a pretty simple guy, had a very simple explanation as to why he didn’t wear khaki pants when WXYZ’s Brad Galli asked him about it during an interview on Tuesday.

You never want to get stale. You don’t want to become stale bread, or overripe fruit, or burnt meat,” said Harbaugh. “Just changed it up.”

Coach Harbaugh talked about the win over Minnesota with @BradGalli on the latest 'Inside the Huddle.'

Hear what @CoachJim4UM liked about the win, what he has to say about Mel Tucker and MSU, and the decision to change his wardrobe. 👀#BeatState pic.twitter.com/R1zSfWmttS

The navy pants worked on Saturday and seeing as how Harbaugh stuck with the khaki look over the years, maybe he’s a superstitious guy and he rocks the navy-look until the Wolverines lose a game.

Next up for Michigan is a home game against rival Michigan State on Halloween afternoon.