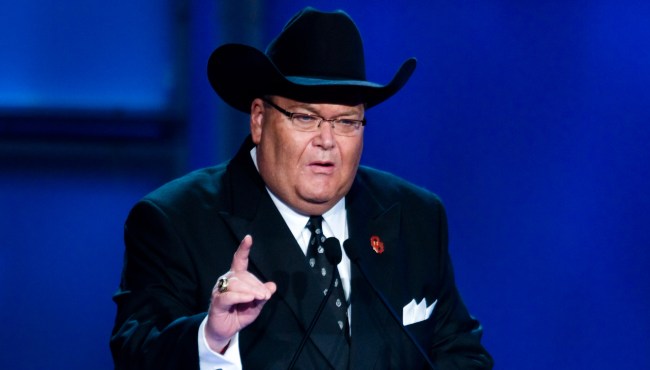 Turns out I was way off. It actually went a little something like this…

Ross recently discussed what exactly went down when he broke the news to McMahon, which he did not do in person, “I didn’t want to go to Stamford, it wasn’t required,” on the latest episode of his Grilling J.R. podcast.

“He was very emotional in that regard, as was I,” said Ross. “It’s hard to explain, he’s got a soft heart more often than not but he doesn’t want anybody to see it.”

He went on to share an example of how McMahon tries to hide what a soft heart he really has.

“I remember one time, I’m walking through the gorilla position, and we had something really good, house was great, everything was wonderful, and we kind of got over the hump, and the 83 week thing was now in the rearview mirror, and I was excited about going out and working, and I said, ‘Vince, God damn man, what a night,” Ross recalled. “I bet our dads are really proud of us.’ And man, he got tears in his eyes, and he screamed at me, ‘God damnit, JR!’ He didn’t want to hear that, because it touched a nerve, because he’s still fighting, and I still think he is, to this day, to still please his Dad, Vincent J. McMahon. And I believe that. But there is nothing wrong with that. There’s nothing wrong with sons wanting to emulate their fathers if it’s emeritus, if the father is deserving. So yeah, he’s got a softer heart.

“But I think, signing me to a two year deal, I signed a two year contract on Friday before WrestleMania on Sunday, and that was the WrestleMania that I came back as a surprise and helped broadcast the Undertaker vs. Roman Reigns match,” he contnued. “That was my assignment, the main event. So that’s what he talked about this year, ‘Well, if you had stayed around,’ I said ‘Well, I got a great opportunity and I’m going to take it, it’s the best paying job I’ve ever had.’ And we discussed that a little bit and he said, ‘Well I can’t match that.’ ‘Well you can match it, you can match it, but you won’t match it, and nor would I advise you if I was in my old roll, to match it.’ Let him go.”

Ross also talked about McMahon letting his contract expire just a week before WrestleMania 35, and what a bad move that was on Vince’s part.

“I can tell you, when I didn’t engage in renewing my contract with them at the end of March, which is another big snafu on his staff, because there is no way that you would have my contract end a week before WrestleMania. That’s stupid. He admitted it’s stupid. That’s crazy. It was a bad position and somebody didn’t point it out to him or they wanted me to be gone and not have a chance to return, because he said to me, ‘You know, JR, God dang it, if you had stayed, I was gonna have you work WrestleMania.’ This year, this WrestleMania, and I ain’t been on television.”

After pointing out that he had only worked as a broadcaster just two times in 2018, Ross explained how, despite what people might think, it was not a good thing from his perspective, “It’s not a great job when you’re sitting home, and you’re trying to battle depression, and you’re grieving for your partner, and Jan, all that, had such a tough year.”

Listen to the entire fascinating discussion below…