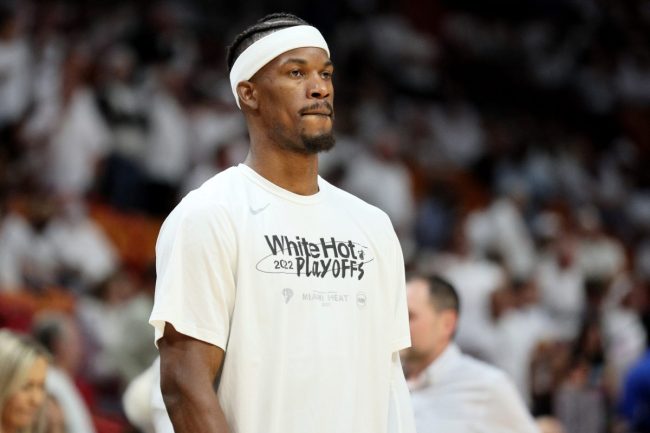 Jimmy Butler sported a new hairstyle on Wednesday when he showed up to an offseason shootaround. The Heat star, known for those braids we’ve grown accustomed to seeing, was seen surprisingly rocking a set of long dreads.

And when I say long, I mean LONG.

They almost touched the floor in a photo of him bending down to tie his shoe. And making things even stranger, they seemingly showed up overnight.

Take a look at the long locks below.

Butler also posted a video of the transformation on Instagram with the caption, “Now you see me, now you don’t.” The clip showed the step-by-step change from braids, to blowout, to dreads.

Butler isn’t the first superstar athlete that we’ve seen make a hairstyle change this offseason (Jameis Winston comes to mind), though this one is the most drastic.

Fans had some fun with the shocking new look after seeing the photos of Butler on social media.

After seeing the new hairstyle atop Jimmy Butler’s head, NBA fans took to Twitter to post their immediate reactions. These are laugh out loud funny.

Jimmy Butler before pulling up to practice pic.twitter.com/jc17Z8AnrV

Fans have been commenting on how funny it is seeing Butler with hair extensions. Most NBA players chase after another type of extension in the offseason…

While Butler is sporting a new look, he’ll hope to have the same steady production in the 2022 campaign.

Last year he averaged 21.4 points a night while helping the Heat nab the No. 1 seed in the Eastern Conference. Butler and Co. will hope to see their season extend into the NBA Finals next Spring.