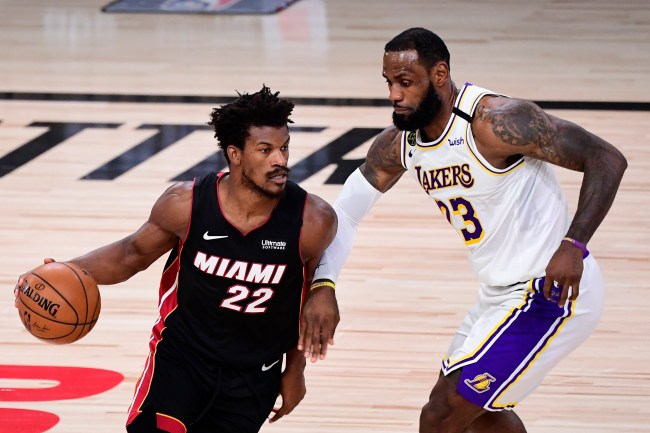 Miami Heat’s Jimmy Butler isn’t going to back down to LeBron James.

In the fourth quarter of game 3 of the NBA finals, Butler straight up told LeBron “you’re in trouble” after scoring.

According to Butler, he was just repeating the same phrase LeBron had told him earlier in the game.

Jimmy Butler says that LeBron said to him at the end of the 1st quarter that “you’re in trouble.” So Jimmy says he just repeated it to LeBron in the 4th.

Jimmy says LeBron told him "you're in trouble" in the first quarter.

He responded by saying the same thing in the fourth 😅 pic.twitter.com/sfJvrgR2AJ

Fans dug up video evidence that LeBron did indeed say “you’re in trouble” to Butler in the first quarter.

You can clearly read Lebron’s lips saying, “you’re in trouble” to Jimmy at the end of the 1Q.

Butler aint lying — all he did was respond back. #HEATTwitter   #NBAFinals

Game 4 of the NBA finals is going to be very interesting now that there’s a bit of bad blood between the two teams.