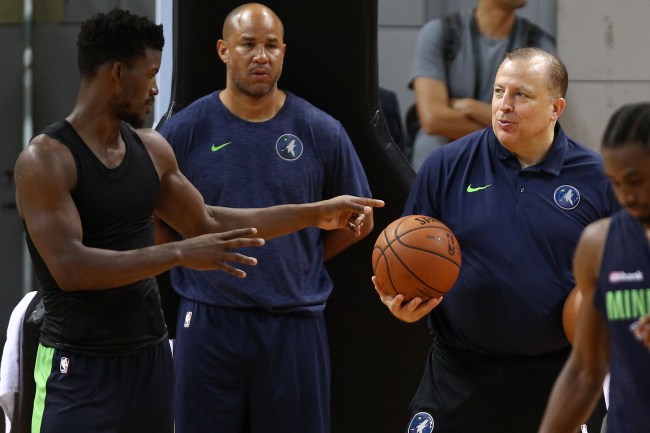 Jimmy Butler likely won’t be sending the Thibodeau family a Christmas card this year, or any year, after a six-year marriage that had its rough patches. Even when he was playing under Thibs in Minnesota, Butler told the media that his fire-breathing coach needed to “relax more,” “Sit down,” and “trust your guys to get a W.” The pair’s tumultuous relationship is what contributed to Butler’s trade to the 76ers and Thib’s subsequent firing.

The oft hard-headed Butler now plays under the more subdued Brett Brown, who he wasted no time in aggressively challenging about his role in the offense.

In any event, the four-time All-Star sat down with Hot Ones where he addressed why Thibodeau’s in-your-face coaching style rubs players the wrong way after a while. He compared Thibs to his lightning rod coach at Marquette, Buzz Williams, made an important distinction on the way he received their feisty criticisms.

“Hell yeah, it’s different. Buzz Williams who’s a lot like Thibs in the sense that they’re gonna yell at you. They’re gonna mother(expletive) you. They’re gonna say it all. And that’s how they talk to you. I think in the league, you can’t really talk to nobody like that … It’s tough to yell at a grown man who potentially is making more money than you. Not saying that you shouldn’t listen to people. It’s a different level.”

Butler isn’t the only player who criticized Thib’s coaching methods. Taj Gibson said that he spent so much time under Thibodeau that he “learned to block him out.”

You can watch the entire segment with Butler below.