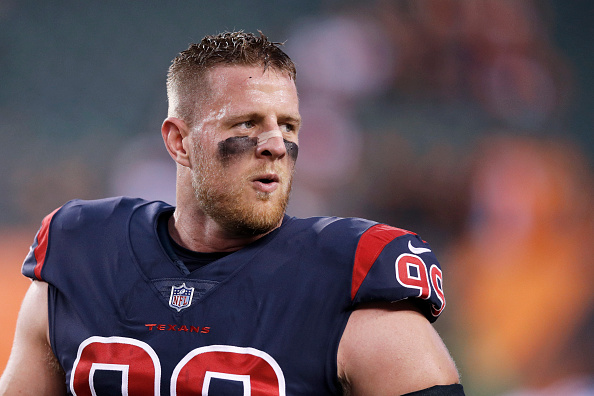 Houston Texans star defensive end JJ Watt is primed for a comeback after enduring early back-to-back season-ending injuries in 2016 and 2017.

According to Texans coach Bill O’Brien, Watt is looking extremely good in camp and has a good chance at winning defensive player of the year again if he stays healthy.

“Those ’14 and ’15 seasons were arguably two of the best seasons any player at any position has ever had,” “I remember we’re playing Baltimore in ’14, and they’re driving, and it’s late, and our guys are just exhausted. I remember J.J. looked over at me and basically said, If you give me a timeout here, I’ll get to Flacco. So I call time. We get a breather. That next play, J.J. strip-sacks Flacco. Game over. We win.

“That’s what I’m seeing now, this summer. That’s the kind of play I’m seeing from him. There’s no reason he can’t do it again.”

Throughout his offseason comeback tour, Watt has posted workout pics on his Instagram and his arms somehow continue to get bigger and bigger.

Of course the Internet had some hilarious reactions to Watt’s freakishly large arms.

Every year that @JJWatt doesn't cosplay as Guile from Street Fighter is a wasted year…. pic.twitter.com/GlBslVLOH9

JJ Watt is a fucking unit, the size of those arms and shoulders pic.twitter.com/BdzUj9H0lq

If I had the body of @JJWatt I would do my Sportscasts shirtless every day of my life as a gift to the masses. pic.twitter.com/V6hxiTkQGP

I get they play different sports, but still LeBron is a physical spec, and JJ Watt's arms look like LeBron when he was photoshopped to be bigger. Hahaha#Repost @jjwatt (@get_repost)
・・・
one day at a time. https://t.co/LgA2LRlO1p pic.twitter.com/lYHIIspprt 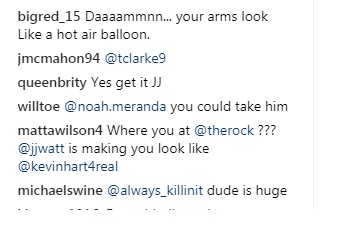 If Watt quits playing football tomorrow he could probably just paint himself green and audition for the next adaptation the Incredible Hulk if he wanted to.