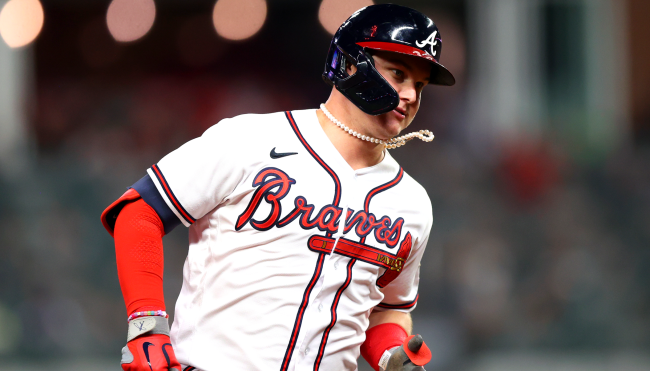 If you’ve happened to catch a recent Atlanta Braves game you may have noticed outfielder Joc Pederson wearing something that we’ve never seen anyone in Major League Baseball ever wear before: a pearl necklace.

Seriously. A whole strand of pearls.

The very unique accessory was revealed last week during one of Pederson’s at bats.

Joc Pederson is up to bat wearing a pearl necklace. pic.twitter.com/BlhVvMLW2q

Ever since then, with the Braves clinching a playoff spot thanks to their fourth consecutive National League East title, Pederson has been proudly showing them off.

At first, after homering in the third inning of the Braves 6-5 win over the Mets on Saturday night at Truist Park, Pederson was asked about his unusual choice of necklace and gave a very vanilla response.

Joc Pederson says him wearing pearls is a mystery. pic.twitter.com/0PjBheK6l6

“There’s not much behind [the pearl necklace],” Pederson said later. “I like it. It looks good.”

Not satisfied with that answer, Pederson was again asked about his pearls this week. His response this time was pure savage.

When someone asked Joc Pederson about the pearl necklace this week, he said there was no story behind it, that he’s just “a bad bitch.”

It is so obvious why his teammates adore him everywhere he goes. Teams need players like him in a 7 month season.

No one cooler my favorite all time dodger

Pederson, who batted .238 with 18 home runs and 61 RBI with the Cubs and Braves this year, takes his pearls to Milwaukee’s American Family Field this Friday for Atlanta’s playoff opener with the first pitch scheduled to take place at 3:37 p.m. ET. Joc better be in the Braves’ starting nine.

UPDATE: Apparently the pearls are still golden as Pederson continued to rake and hit bombs during the Braves’ National League Championship Game win over the Dodgers Sunday night (and has upgraded his status from being a “bad b-tch” to a “bad motherf—er”).