Give Joe Burrow An Academy Award For Selling This Flop 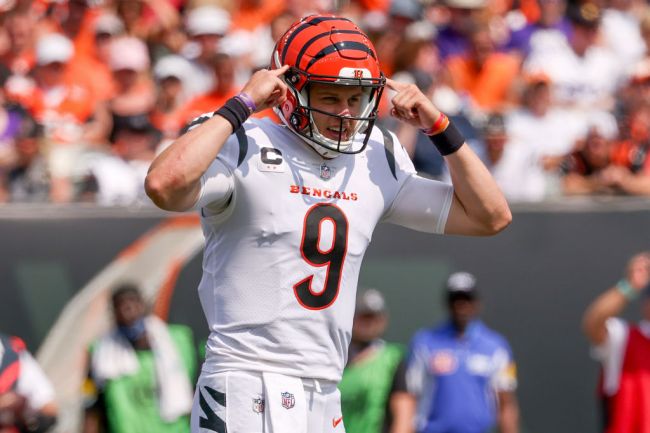 Joe Burrow is a gamer. The second-year quarterback out of LSU is coming off of a brutal knee injury from a year ago and has looked close to form throughout the first two weeks of 2021.

He is not only slinging the pill with authority and escaping (a lot of) pressure, but he is one heck of a thespian.

Burrow, who graduated with a degree in consumer and family financial services, must have taken an elective acting class or two at either Ohio State or LSU.

During the third quarter of Cincinnati’s game against Chicago on Sunday, the Bengals faced a 3rd-and-16 from their own 29-yard-line. With no one open downfield, Burrow decided to scamper out of bounds to avoid taking a hit or turning the ball over.

As he stepped out of bounds, Bears defensive lineman Robert Quinn rolled up on the drive-by and lowered a shoulder. On the receiving end, Burrow leaned into the hit and then went flailing to the ground.

Quinn and he undoubtedly bumped into one another and Quinn was absolutely late to getting there, but Burrow definitely flopped. He went down as if he had been hit by a sniper and ended up drawing the call.

WHAT THE FUCK IS ROBERT QUINN THINKING pic.twitter.com/NtNphYpFhw

Here’s a better couple of angles. Quinn barely touched him and Burrow sold the heck out of it.