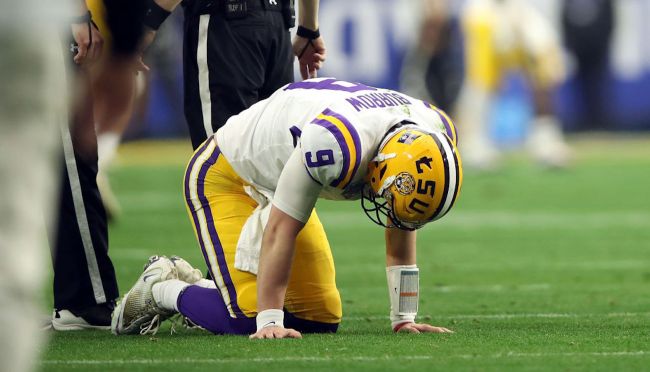 Joe Burrow has been ascending to the top of the football world for a few years now.

After being named LSU’s starting quarterback in 2018, leading them to a 10-3 record, Burrow then won both the Heisman Trophy and the National Championship the following year. This, obviously, caught the attention of the NFL, as Burrow was then selected by the Cincinnati Bengals with the #1 overall pick in the 2020 NFL Draft.

After an ACL injury cut his rookie season short, Burrow rebounded in his sophomore season as he not only led the Cincinnati Bengals to their first AFC North title since 2015 but their first Super Bowl appearance since 1989, which is before he was even born.

While that may be the macro view of Burrow’s meteoric rise, football fans who have been paying attention the whole time think they’ve found the micro-moment that truly launched Burrow’s current career arc.

The moment in question went down during Burrow’s first season as LSU’s starting QB when the #11 ranked Tigers took on #8 ranked UCF in the Playstation Fiesta Bowl on New Year’s Day 2019. Trailing 7-3 in the first quarter, Burrow threw a pick-six and was laid out by defensive lineman Joey Connors on the return and was slow to get up afterward. To add insult to injury, linebacker Nate Evans barked at Burrow as he attempted to rise to his feet.

“The only thing I am going to say about it is, the only reason I didn’t get up in one second was because I got the wind knocked out of me,” the quarterback said to reporters after the game. “I would have got up immediately if that didn’t happen.”

This is the moment Joe Burrow became Joe Shiesty pic.twitter.com/zovKgO9ZVb

The moment everything changed for Joe Burrow. 😤 pic.twitter.com/zflMeUNYpw

From there, though, the LSU Tigers would go on to win the Fiesta Bowl 40-32, while Burrow — who completed 21/34 passes for 394 yards, four touchdowns, and the one interception in the game — would never lose again in college. The rest, as they say, is history.

RELATED: Joe Burrow’s Latest Comments About The Super Bowl Should Terrify The Rams And Their Fans