Joe Burrow Has A New Nickname Courtesy Of A Bengals Teammate, And It Has Something To Do With Aaron Rodgers 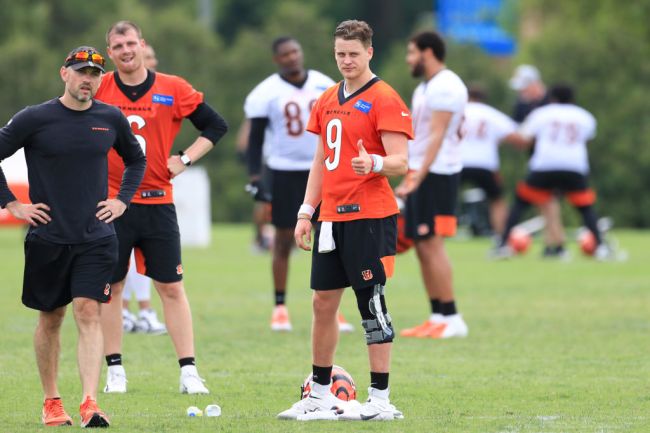 Joe Burrow has a new nickname courtesy of one of his Cincinnati Bengals teammates.

The most popular nickname for Burrow thus far has been ‘The Tiger King.’ The nickname works given the fact that he played for the LSU Tigers and now plays for the Bengals, plus the Netflix show was unbelievably popular during his rookie campaign.

His new nickname doesn’t have anything to do with a man in Florida and his pet tigers, it’s a tip of the cap to arguably the best quarterback in the NFL, Aaron Rodgers.

Bengals defensive lineman Mike Daniels called Burrow ‘Baby Aaron’ during his appearance on Good Morning Football. The nickname isn’t anywhere near as clever as ‘The Tiger King,’ but it should make Bengals fans happy knowing Burrow has some Rodgers in him.

Daniels played in Green Bay with Rodgers for a number of years, so he knows what he’s talking about here.

"You know what I say about @JoeyB, that's like baby Aaron."

Our guy @Mike_Daniels76 is here and telling us why he wanted to resign with the @Bengals! #WhoDey pic.twitter.com/pZbFtBghgL

“You don’t see many rookies step into a locker room, and you can tell, you would think he’s a four-year vet if you didn’t know who he was,” Daniels told the NFL Network. “To have that at the quarterback position, that means he has the right type of savvy, the right type of poise that you only see from guys like Aaron. I’ve been saying this since I got there. I see a lot of similarities between the two.

Burrow has played in just 10 NFL games after having his rookie campaign cut short due to an ACL injury, but that hasn’t hampered expectations for the former Heisman Trophy winner. Not only are fans in Cincinnati ready to see Burrow officially burst onto the scene this year, so too are his teammates.