If Joe Burrow Wins The Super Bowl, He’ll Accomplish A Historic Feat That No Other QB Has 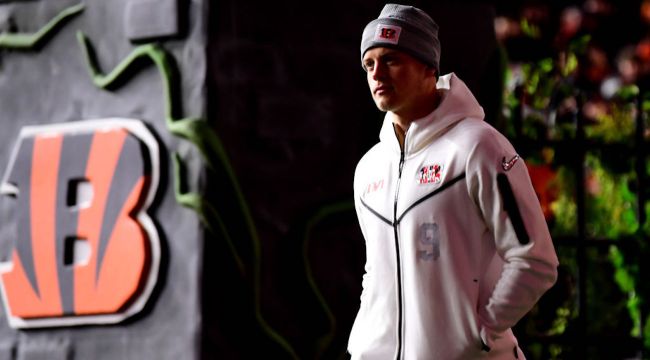 After just two seasons in the National Football League — one of which was cut short by a brutal knee injury — Joe Burrow, the #1 overall pick in the 2020 NFL Draft, is starting in his first Super Bowl. Not only that, but he’s doing it with the Cincinnati Bengals, a team that hadn’t been to the big game since 1989.

Burrow’s rise through the ranks of the football world has been happening for a few years now, as he status as a #1 overall draft pick was preceded by a Heisman Trophy and National Title in college while playing at LSU.

Due to those previous accolades, if Burrow wins the Super Bowl on Sunday, he’ll be the first-ever quarterback to win a Heisman, national championship, and Super Bowl title. As Baton Rouge’s The Advocate calls it, it would be the “Triple Crown” of quarterbacking.

“Only three other quarterbacks in football history have won a college title and a Super Bowl — Joe Namath, Joe Montana and Ken Stabler but none of them won the Heisman,” The Advocate points out.

Burrow and his underdog Cincinnati Bengals — the AFC Champions are currently four-point dogs in the big game — will take on Matthew Stafford, also starting in his first Super Bowl, and the Los Angeles Rams in Super Bowl LVI at California’s SoFi Stadium on Sunday, February 13.