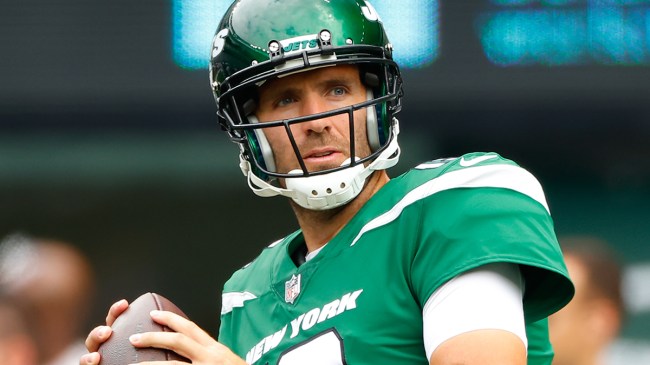 It feels like just yesterday that NFL fans (primarily those who root for the Baltimore Ravens) were routinely engaging in serious debates over whether or not Joe Flacco had put in enough work to earn the “Elite Quarterback” label that was bestowed upon peers like Tom Brady and Peyton Manning.

It’s retroactively difficult to argue that was really ever the case. The University of Delaware product may have lived up to some of the promise he showed in an inaugural season that ended with him winning Rookie of the Year, and while he did earn the right to raise the Lombardi Trophy (along with MVP honors) when the Ravens topped the 49ers in Super Bowl XLVII, that contest was arguably the high-water mark of a solid but decidedly Non-Elite career.

Flacco’s best days may be behind him, but the 37-year-old veteran isn’t ready to call it quits just yet. The QB was traded to the Jets last year and signed a one-year deal to remain in New York for at least one more season, where he’ll likely end up riding the bench while serving as a mentor to Zach Wilson.

It’s safe to say Flacco is probably one of the last NFL players who’d come to mind when discussing the league’s most colorful personalities. However, based on a behind-the-scenes video the Jets posted on Wednesday, he seems like he could be an absolute blast to hang out with.

The clip in question is from the fourth installment of the docuseries 2022 One Jets Drive and features Flacco chatting with some members of the CBS production team during a conversation that included some discussion about his role as an elder statesman on a team that’s home to a ton of younger players he implied have questioned his usefulness.

However, those skeptics apparently have nothing on a group of even younger haters that Flacco painted as his harshest critics: his very own kids, who he said are not shy about calling his skills into question and second-guessing the advice he doles out after a bad game.

At least he has a sense of humor about it.