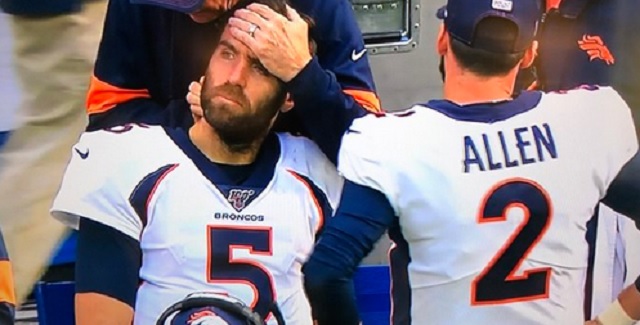 The Denver Broncos lost another heart-breaking game this week and Joe Flacco was not happy.

Late in the game, the Colts were able to march up the field which lead to a game-winning 51-yard field goal by veteran Adam Vinatieri.

While speaking the media after the game, Flacco ripped the Broncos play-calling late in the game for playing it too safe while having the lead and putting the defense in a bad position. Flacco was frustrated by the decision to run the ball up the middle on third-and-5, which allowed the Colts to stuff the run, call a timeout and get the ball back with enough time to score.

“I just look at it like, we’re now a 2-6 football team and we’re afraid to go for it in a two-minute drill, you know?” “Like, who cares if you give the ball back to the guys with 1:40 left? They obviously got the field goal anyway.

“And once again: We’re a 2-6 football team. And it just feels like we’re kind of afraid to lose a game.”

Who cares if they have a timeout there at the end or not?” Flacco said. “Getting in field-goal range isn’t that tough. You’re just putting your defense in these bad situations and I just felt like, what do we have to lose? Why can’t we be aggressive in some of these situations? That’s kind of how I feel about a lot of the game today.”

Here’s the video of Flacco’s presser.

Joe Flacco straight up calls out the pathetic offensive coordinator’s play calling as he rightly should!! 👏🏼 https://t.co/QhkPsbdPJb

1. I agree with Flacco. You can't expect to sit on a 1 point lead against a team with competent QB play in today's NFL.

2. If Joe Flacco does something on the other third downs, the #Broncos probably trust him at the end. They were 2/12 https://t.co/Uyz38zlS7i

You know it's bad when of all players, joe flacco throws massive shade on the playcalling. Joe fucking flacco. The guy who dumps off to freeman on a 3rd and 10 for 3 yards and calls that acceptable. Scangs VS Joe. Ass Vs Trash https://t.co/BUGcyfWVDh

He's so right. Also, it's really hard to be aggressive when your QB is Joe Flacco. https://t.co/nVDCFLH1CV

They should be thrown under a Mack Truck for that embarrassing game plan. https://t.co/T3yvQEkMKC