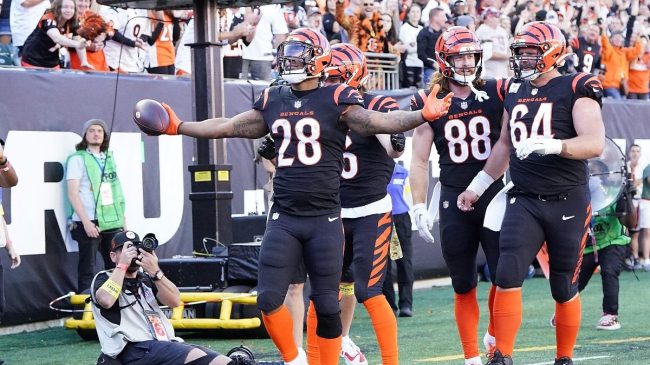 The Cincinnati Bengals went off in the first half against the Carolina Panthers. So much so, the coaching staff ended up benching the starters in the third quarter. However, all eyes are on Joe Mixon, as he had a historic day on the football field. His performance was so massive, he made NFL history and etched his name with some elite company.

According to NFL on CBS, the Bengals running back recorded 200 scrimmage yards and five scrimmage touchdowns before being pulled out of the game. There are only five other players to achieve this statline in league history. Joe Mixon finds himself alongside Jerry Rice, Jonathan Taylor, Clinton Portis, Shaun Alexander, and Jamaal Charles as the only players to achieve this statline in a single game.

That is a great group of players to be compared to. Most of them were absolute studs throughout their career in the NFL. Not to mention, Jerry Rice is considered the best wide receiver of all time. So, this was a big performance for Joe Mixon as he can proudly compare himself with this elite group of players.

With J’Marr Chase ruled out with a hip injury, Cincinnati made the smart decision to feed the ball to Mixon. The Bengals running back carried his team to a win on Sunday. We should see plenty of Joe Mixon for the remainder of the season, as he’s one of the best running backs in the league.