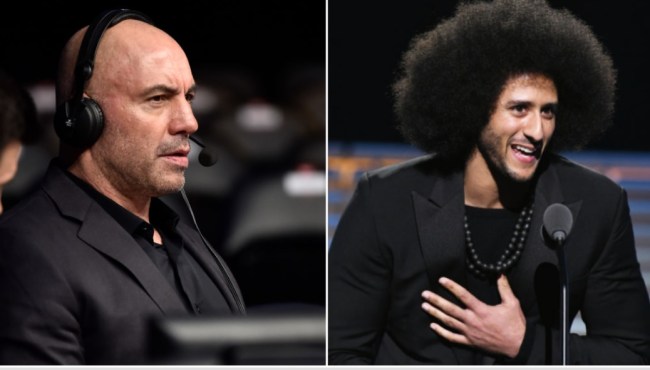 A few weeks ago, a clip of ‘Colin in Black & White’ in which Kaepernick compares NFL training camps to the slave trade went viral on social media.

Kaepernick: “What they don’t want you to understand is what’s being established is a power dynamic,” “Before they put you on the field, teams poke, prod, and examine you. Searching for any defect that might affect your performance. No boundary respected. No dignity left intact.”

During the latest episode of the Joe Rogan podcast, Rogan and guest Theo Von were dumbfounded by Kaepernick comparing NFL combines to slavery and blasted the former 49ers quarterback over his comments.

Joe Rogan<em>“That’s what he’s doing; he was measuring like wing spans and the combine scores, like for weightlifting and speed and all that stuff. That’s to see how physically adept you are, how good you’re gonna be at football, so they’ll give you tons of money. The idea that this is comparable to slavery, whoever f***ing wrote that down and then he — the fact that he read it and said it, and then they had that video where they’re comparing the NFL owners to the slave masters, and they’re shaking hands with each other: What the f*** are you talking about?”