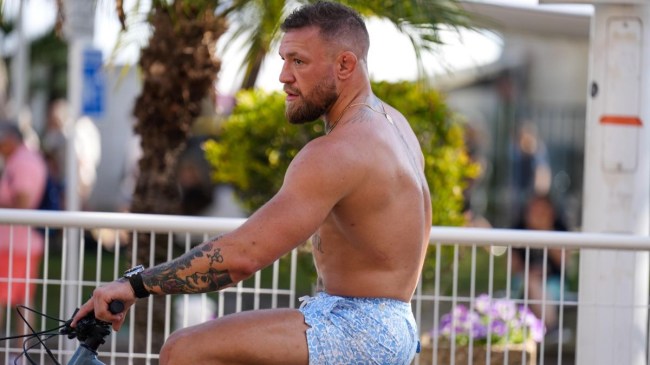 Somewhere along the line, former UFC champ Conor McGregor and UFC announcer turned podcast star Joe Rogan appeared to have had a falling out. Maybe McGregor got salty over Rogan questioning his status as Forbes’ highest-paid athlete.

Maybe it’s as simple as McGregor not liking the way that Rogan commentated his fights, particularly his recent string of losses. But it’s become increasingly clear that the two aren’t fans of one another.

Rogan has shied away from escalating the feud in the past. But now it appears that he’s enough of McGregor’s game. The podcast host took direct aim at McGregor on a recent episode of his podcast.

It’s no secret that McGregor has looked much more jacked since his last UFC fight. He’s currently not in the USADA drug testing pool and cannot fight until he’s been in the pool for six months. This led Rogan to suggest that change in McGregor’s physique didn’t come naturally on a recent episode of the Joe Rogan Experience.

“He’s taking his shirt off and posing constantly, and he looks like his piss would melt that USADA cup,” Rogan said. “Like, it would just like burn a hole right through the bottom of that USADA cup. … The weird thing is that there is a loophole in USADA that allows you to get out of the testing pool. Get out of the testing pool, you can just juice up. Seems weird, and you just need six months. If someone had an injury, though, that’s a very wise way to approach it.” – via MMAFighting.com

McGregor, who’s never one to shy away from controversy, fired right back in a since-deleted tweet.

With McGregor out of the testing pool, it’s impossible to say for sure if he’s clean or not. But one thing is certain, my man is doing one hell of an impersonation of a 1990s pro wrestler.