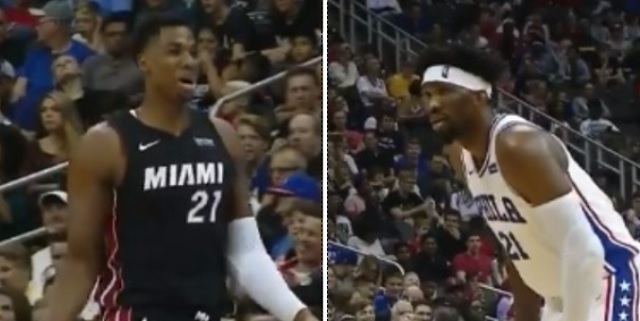 Looks like there’s a new big man rivalry in the NBA. During today’s Sixers-Heat preseason game, Joel Embiid clowned Hassan Whiteside and called for Heat coaches to bench the Miami Heat center got into foul trouble early on in the first quarter.

Embiid draws a foul and tells the Heat to take Whiteside out 😂 pic.twitter.com/VwZnpLPVAA

After the game, Whiteside was a bit defensive whined to media outlets about showing the Embiid trash talking highlight.

Funny how y’all don’t show me telling him the same and 1-7 shooting 🤷🏽‍♂️ or the first 2 flops I mean blocks. Lol y’all fan boys I swear😂

That’s when Embiid dropped the hammer for Whiteside’s Twitter whining.

Dude they had to take your ass out or you would’ve fouled out in 5 min… And we’re talking about Preseason, not regular season….. #Softy https://t.co/IAIBDDypFK

And keep caring about stats and not your team success….. your +/- was ass @youngwhiteside #Softy

My bad y’all , I thought I was using my burner account #TheProcess

Update: Hassan Whiteside has fired back.

@JoelEmbiid 31 games in 3yrs Hopefully I get to see you regular season🤷🏽‍♂️😂🤷🏽‍♂️😂 #SolarEclipse #EmbiidEclipse https://t.co/iaFfK3h3V6