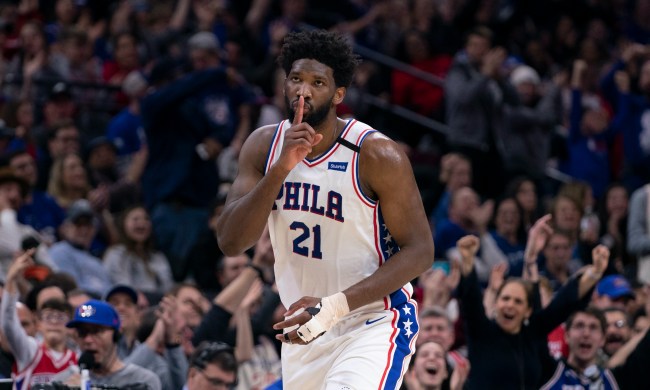 You see, here’s the thing with people like Joel Embiid: the tolerance of their personality is totally contextual. You like him or you hate him depending on the circumstances.

When Embiid was a young, unpolished yet physically dominant, goofy yet genial center coming out of the University of Kansas who spent his free time shooting his shot at Rihanna and speaking in an endearing broken English, people loved him. He was different, he was refreshing.

But that was years ago. Now, Embiid has been in the league  for a while and he’s no longer that spunky rookie. Fans have established their relationships with him. Take me, for example: I’m not a fan. And I decided I wasn’t a fan during last year’s playoffs when Embiid applied his trademark immaturity to the completely wrong situation.

You know when we were kids, there was always that one little fucker in the class who would “mess” with substitute teachers just because he thought it was funny (but no one else did)? That’s Joel Embiid. Except… Joel Embiid is a fully grown, 25-year-old adult. At what point does his class clown playfulness become blatant immaturity? Well, I reckon that point may have been crossed last night, especially when it comes to the opinions of 76ers fans.

The tides have certainly begun to turn sour on Embiid, as the Sixers’ rocky first half of the season has left fans questioning if Embiid is part of the problem or part of the solution, especially when considering his glaring lack of maturity and leadership skills.

But instead of putting his head down, grinding, and trying to prove his haters wrong, Embiid coped with a chorus of Monday night boos by doing what he does best: hopping on social media to act like a tool.

In the span of just an hour last night, Embiid made three (3!) separate social media posts to address the situation, including one that quoted the iconic “die a hero” Harvey Dent line from The Dark Knight.

"You either die a hero or live long enough to see yourself become the villain.” #TheProcess pic.twitter.com/m5EPaKcsfb

Made for this… If I can take it then you can too. PHILA TOUGH!!! #AllLove pic.twitter.com/hno6UH1GPD

Embiid’s posts obviously caught the attention of more than just basketball fans, as Miami Heat star and former Sixers teammate Jimmy Butler commented on Embiid’s IG with an equally toolish response: “I know a place where villains are welcome 🤷🏿‍♂️.” Haha! Siccccck, Jimmy! You’re like a bad guy and now you’re in Miami, we get it! Sickkkkkkk. Embiid, never one to shy away from some internet clout, immediately responded by saying “Damn right my brother”. 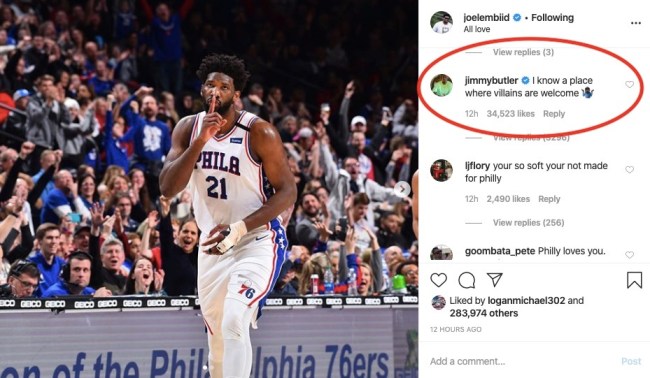 Sixers fans, look, if you’re reading this, I hate that I have to be the one to break it to you, but it’s a wrap on The Process. Embiid is a clown and Ben Simmons is overrated as almighty hell — the 76ers organization will never see an NBA Finals with these two at the helm. Never.