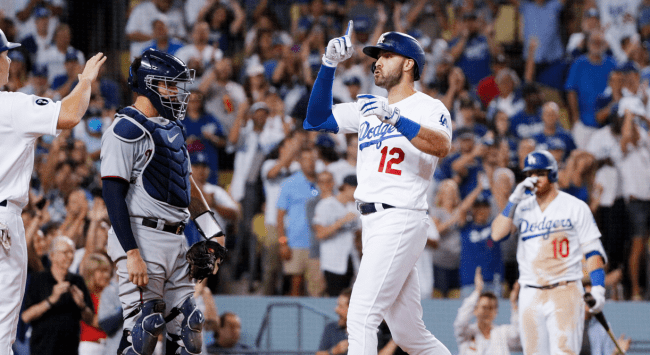 It’s really hard to feel bad for someone who plays a game for a living and is making $10 million doing it, but you almost have to with Dodgers outfielder Joey Gallo. He is human, after all.

In fact, Gallo said he “hit rock bottom” and “felt like a piece of s–t” while playing for the Yankees.

That sort of thing will happen in New York when you bat .160 and .159 in consecutive seasons in the Bronx.

Luckily for him, he was able to get out of New York at this year’s trade deadline and landed on the team with the best record in baseball, the Los Angeles Dodgers.

At 77-33 and having outscored their opponents by 236 runs (the most in MLB), the Dodgers can afford to be patient with Gallo and, so far, it’s paying off.

In the Dodgers’ 8-5 win over the Minnesota Twins Wednesday night, Gallo came into the game as a pinch hitter and stroked a three-run homer.

After the game, Gallo was very appreciative of the fans cheering him on after hitting the bomb.
“Yeah, it felt good,” he said after the game. “I was pretty excited, especially coming off the bench, you know, you don’t even know if you’re gonna play or not so to get an at bat in that situation and and to come through and hit a homer, you know, ended up being a pretty big one for us so it’s nice to help the team.”

“Yeah, it’s been a while since I’ve heard people chanting for me so I’m pretty excited about that,” he replied. “They’ve been awesome so far, just
cheering me on, saying that they love that I’m here and it makes me feel good and such a great team to be a part of a great organization so hopefully we can keep winning.”

Gallo was then asked about the work he has been putting in since joining the Dodgers and how that is now paying off.

“We’ve been working on a lot of stuff,” said Gallo. “I don’t want to bore everybody and get into it all, but we definitely been working a lot and I think one of the reasons they brought me over was that they saw things that they could fix and, you know, help me be the player that I know it can be. So, you know, they have a great staff, great hitting crew, so I’m excited to keep working with them.”

Wednesday night was the Dodgers’ 10th straight win so, somehow, Gallo ended up going from one team that was dominating right to another – something that isn’t lost on him.

“I came from a team that was winning a lot and now this team’s winning even more,” he said with a grin. “It’s been a crazy year for winning for me so I’m excited about that. It’s a really special group of guys in terms of just the talent, the ability, but like, clubhouse, great character guys, guys who work hard, I’m just blessed to be a part of it.”

That he is. Good stuff.

"It's been a while since I've heard people chanting for me, so I'm pretty excited about that." Joey Gallo on his pinch-hit homer and his time so far with the #Dodgers. pic.twitter.com/i03t5YwVEF

Based on the comments on the video, Gallo apparently has a lot of fans supporting him.

I feel good for Joey, he had a tough time with the Yankees, he must be feeling overjoyed with the dodger organization, also to be on the same team as his close friend & off-season workout buddy Cody Bellinger…hope he has a good road trip in K.C. & Milwaukee.

Such a sense of relief for him. Cool to see, hope it gets better from here.

How can you not get emotional about baseball? LA is happy to have Joey G

That’s would be me I’m afraid 🥱

You watch him for 140 games while he hits . 159 and strikeouts out 194 times and see how much you're cheering for him