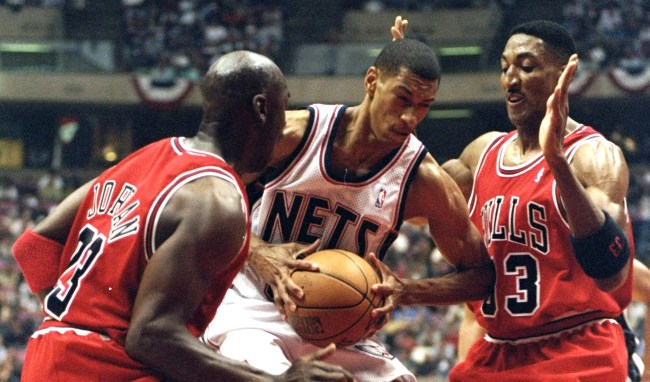 From 1996 to 1999, current University of Kentucky head coach John Calipari was the man in charge of the then New Jersey Nets.

During his tenure as the Nets head coach, Calipari had the definition of a roller coaster experience, going just 26-56 in his first season, 43-39 in season two – making the playoffs, and 3-17 in his third season before being fired and moving over to Philadelphia as an assistant for 76ers head coach Larry Brown.

Unfortunately for Calipari, during the one season his Nets made the NBA playoffs they had to face, you guessed it, the juggernaut that was Michael Jordan and the Chicago Bulls in the first round.

During his most recent episode of Coffee with Cal for ESPN, Calipari, joined by his former players Sam Cassell, Keith Van Horn, Kerry Kittles, and Sherman Douglas, recalled a great story about how Jordan tried to intimidate him (and pretty much succeeded) during those 1998 playoffs versus his Nets.

“They played four guys over 40 minutes,” Calipari explained. “We had them on the ropes a little bit. But again, what did [Jordan] average? I think he averaged like 35 in that series. … So I’ll tell you guys… I’ve read something that [former Sonics coach] George Karl walked by him without saying hello in a restaurant on the eve of a game and he went for like 60. Like, ‘Oh, Okay.’

“So for me, when he came up to me and we’re in a timeout, I ain’t saying s**t to this guy. There’s not one word I’m saying. And when I walked and he followed me, I’m not saying anything. So turn around and I look at [former Nets assistant] Kenny Gattison, I say, ‘Is he still there?’ because, again, if you made this dude mad. I mean… Kerry, tell him what he did to you in the regular season.”

Kittles, obviously not wanting to remember, talked about how Michael had the ability to “flip the switch whenever he wanted on either side of the court.” Then explained how he was having a good night in one regular season game then MJ decided to shut him down.

“I caught the brunt of it as a young player in the league, where I had it going one night in the first half, and then he switched on me in the second half and I don’t think I scored a bucket in the second half,” Kittles recalled.

Calipari then got back to his story and said, “He looked at me and went like that [made a zero sign with his hand]. And I looked away from him and I look at Kenny Gatt and I’m saying, ‘Is he looking at me?’ So I look back up at him and he went like that [made the sign again], and I go, ‘Kenny, what’s he talking about?’ [Gattison said], ‘I don’t think he’s going to let Kerry Kittles score.’ And you’re right — he went from not guarding you to saying, ‘I’m shutting it.’

“I mean, you guys have to admit, the dude had something special inside of him… on both sides of the ball,” he continued. “If he needed to get 60 or if he needed to shut somebody out.”

Check out the entire fascinating conversation below for even more incredible stories about MJ at the height of his powers.