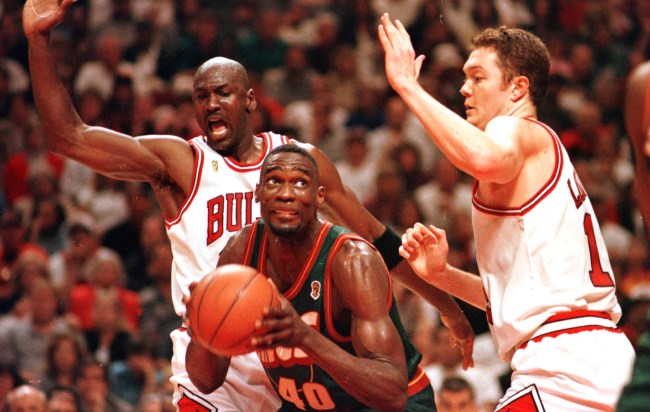 In another perfect example of how back when he was playing for the Chicago Bulls, it was revealed on Sunday during The Last Dance that Michael Jordan manufactured some ill will towards then-Seattle Supersonics head coach George Karl (a fellow North Carolina alum, by the way) over Karl ignoring him one night at a restaurant prior to the 1996 NBA Finals.

“He walked right past me,” Jordan said about that night. “And I looked at Ahmad and I said, ‘Oh that’s how you’re gonna play it?’ I said, ‘It’s a crock of s**t.’ We went to Carolina. We know Dean Smith. I see him in the summer. We play golf. You’re gonna do this? Okay, fine. That’s all I needed. That’s all I needed — for him to do that — and it became personal with me.”

George Karl didn't say hello to Michael Jordan at dinner and the rest is history pic.twitter.com/i723e90nOR

Karl appeared on SiriusXM NBA Radio following the airing of that episode of The Last Dance and responded to Jordan’s saying he felt slighted and used that as motivation to kill the Sonics in that year’s NBA Finals.

“We take it to the team that we don’t want any socializing with Michael Jordan,” said Karl. “I have Sam Perkins on my team that played with Michael. I told Sam, I said ‘Sam, if you want to socialize with him, do it before the series starts and get it over with, and then from the first game through whenever it ends, we are S.O.B competitors just like he is.’ So I advised not only Sam, I advised my whole team, we’ve gotta compete with Michael’s intensity and Rodman’s craziness and the physicality of the game, and we’ve gotta be the aggressive team as much as possible.”

"I didn't know it would be that much of a big deal."

Former Sonics Head Coach George Karl tells @TheFrankIsola why he didn't acknowledge Michael Jordan at a restaurant during the 96 Finals.

“So after that speech, I run into Michael, and I’m sitting here going, ‘if I go see Michael, I’m breaking the code with my team. If I don’t go see Michael, he’s probably gonna use it, that I stiffed him.’ I didn’t know that it would be that much of a big deal, but I think I made the right call. I had to stay by the code that I gave my team.”

Truth be told, if Karl had gone up and spoken to Michael you know he would have just found some other perceived slight to feed his killer instinct.