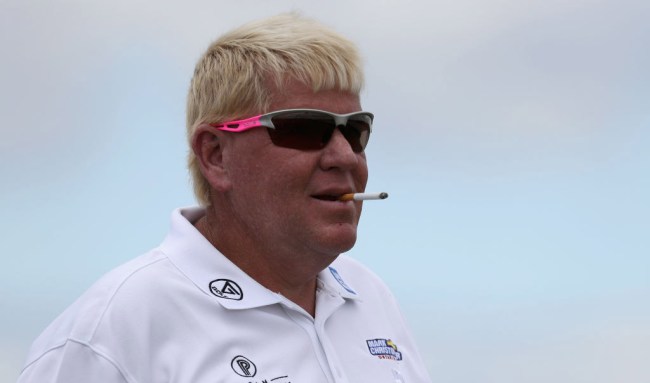 Yesterday, new betting odds were released naming Tiger Woods the odds on favorite to win the Masters. Of course that can all change if Woods limps to the finish line this week at Bay Hill. Or, if another star comes out and wins the Arnold Palmer Invitational this week and then turns around and also wins the Dell Match Play Championship next week. But assuming those things don’t happen, Woods is going to head into Augusta the favorite, whether that is deserved or not.

Recently, one of Tiger’s former PGA Tour peers, John Daly, chimed in on what he thought Tiger could accomplish with this latest comeback. As a person who has had a front row seat to see Tiger dominate for years, Daly has lofty expectations for what Tiger should accomplish if his body stays healthy.

“Tiger can win until he’s 60, as good as he is,” Daly said. “He’s got the strongest mind out there, his mental capacity’s like (Jack) Nicklaus  — he can overcome an Arnold Palmer’s army. With Tiger, I just noticed he was two or three under today for a little bit. I honestly think he has a great shot at winning the Masters this year.”

“And he tried to do it. And I’m still doing it. But he looks like he’s 100 percent full-go. He’s swinging just as hard as he did when he came out in 1997. I’m a big fan of his. I just think to be able to play with Jack Nicklaus and Arnold and all these greats and to play with Tiger — to have two guys that are going to be the best ever — I think Tiger can actually beat Nicklaus’ record. I do.”