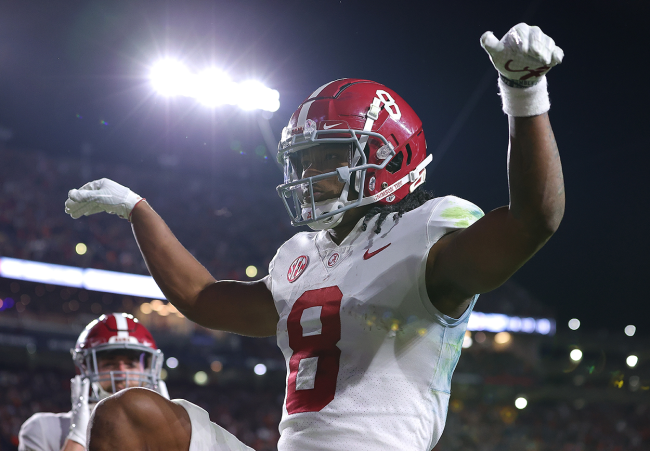 Alabama Crimson Tide wide receiver John Metchie III took one wrong step during the SEC Championship against Georgia and tore his ACL. The team’s leading receiver crumpled to the turf and was unable to play for the remainder of the season.

Now, six months later, he looks like he is on a great path to return to full health for the fall.

Metchie, who stands 6-foot-0, 195 pounds, was an absolute monster in Tuscaloosa. He recorded 96 receptions for 1,142 yards and eight touchdowns during the 2021 season and chose to forgo his final year of eligibility and enter the NFL Draft.

The decision paid off and Metchie was drafted No. 44 overall in the second round by the Houston Texans. While the team has not placed a timetable on his return, Metchie said that he plans to be playing “full-go football” by July.

“I wouldn’t put too much stock in what he said — we’re not going to rush or push him to return,” said general manager Nick Caserio. “When he is ready and physically able, we feel that it’s the right thing to do, then he will be on the field.

“He will do everything he can to get himself to that point. I certainly wouldn’t put any timetable on it or any expectation on it. When he is ready, he will be ready.”

Well, it looks like Texans rookie wide receiver John Metchie III is getting pretty close to being ready.

He has been a part of the team’s rookie camp, OTAs and now mini-camp, but is obviously not a full participant. He started slow last week with some movement and individual drills at half-speed.

On Tuesday, Metchie was at full speed and was cutting off of both legs like his injury was practically nonexistent. He looked explosive, was moving fluidly without any hitch and seemed to have his full strength under him.

Last week, Lovie Smith said the team wouldn’t be trying to force him into the practice and would be taking it ‘day by day’

As a result, it will be interesting to see how the team plans to treat Metchie. It’s clear that they do not intend to rush him back, but what does that mean? When will he put pads on? When will he get in a game? He looks pretty healthy in the looks from camp on Tuesday!